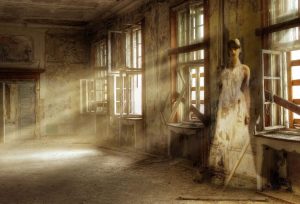 This is a true story about a haunting in the warehouse of a furniture store that I once worked at. I have chosen not to say the name of the store or the exact location but I will say that it is located in a western suburb of Chicago. This is not fiction.

About a year ago, I was working as a warehouseman in the back of a furniture clearance center. Nothing very exciting took place back there as far as the work went; we basically unloaded sofas, armoires, tables, and such.

Once unloaded, it was our job to fix them up (most of the stuff was damaged before it was even shipped to us) and wheel them out to the floor (showroom). The store faced a rather busy road but behind the store was an alley. On the far side of the alley was a fence that ran along the length of the store and separated us from the apartments on the other side.

I had been working there for about two years when strange things started happening. There had always been rumors about a ghost in the warehouse, even before I started working there. I had just shrugged them off because I was basically skeptical by nature.

In fact, some of the older warehousemen and I used to make up stories about strange happenings to scare the newer guys when they came in. However, after I had just begun my second year, strange things DID start happening.

The first occurrence (that I can remember) happened on a slow, summer afternoon. There wasn’t much work for us so we decided to play a game of hide-and-go-seek. In the middle of the warehouse was a little brick structure we called the brick house.

Inside it was where we put most of our tools and cleaning supplies. On top, however, there was only the air conditioning unit and a couple of stacks of old invoices. A friend of mine decided that this would make a decent hiding spot.

I watched him climb up the side of the brick house from the spot that I was hiding and didn’t think much of it. However, only a few minutes later, he jumped (fell is more like it) down and ran out the huge back door that we used for loading purposes. I was reluctant to give up my hiding spot (it was a good one!) but it looked to me like he had hurt himself and so, I ran out after him.

He said that once he had gotten up to the top of the brick house, his body went suddenly cold. He said that for no reason, he just felt deathly afraid, more afraid than he ever had before. He tried for a few seconds but couldn’t shake the feeling. He jumped down in fear of something, but he didn’t know what.

Everyone immediately thought of a ghost but I personally didn’t believe it.

I figured that he was just imagining things. However, since that time, a LOT of strange things began to happen.

A friend of mine and I were sitting around not long after that (laziness) just shooting the breeze a bit. As I was talking, I noticed out of the corner of my eye what I thought was someone walk by the aisle not too far away from us.

My friend also noticed it. All I saw was someone decked out in black clothes but I couldn’t tell who it was. I thought at first that it was the receptionist (who I had a crush on) because she happened to be wearing all black that day.

The aisle she walked down went right to the warehouse bathroom. My friend and I decided to play a little trick on her and so we snuck up to bathroom door, which was closed, and waited for her to come out.

We waited and waited. When it became inevitable that she wasn’t coming out, we went in… and found nothing. Now there is NO WAY whoever it was we saw could have walked by us again or gone somewhere else.

That aisle went ONE way. Other guys have talked about seeing shadows or what they thought were people out of the corners of their eyes as well, but I don’t have first-hand knowledge of those.

One other story a co-worker told me was that he saw our manager walk out from the floor, walk through the warehouse, and into a trailer full of furniture. Figuring that he would want some assistance, my co-worker followed him into the trailer but no one was there. It so happens that I was out on the floor talking to our manager at that point in time!

Other strange things kept happening as well. Work belts kept disappearing, carts kept moving on their own when no one was around, and boxes in back that were full of furniture and heavy as a son-of-a-gun kept shifting and leaving marks on the floor. But the weirdest thing of all had to be the whistling.

For no reason at all, from the time that one worker climbed the brick house to the time I left that job, every now and then, you could hear someone (something?) whistling when there was NO ONE ELSE around!!! This was not just wind-like whistling, these were actual musical numbers being whistled.

The first time I heard it, I was alone in the warehouse. I heard some whistling coming from a corner across from were I was and so I decided to walk on over there to see who it was. It was NO ONE! Once I got there, the whistling stopped, but then I heard it from a different part of the warehouse. At that point, I became freaked out and ran out on to the floor.

It turned out I wasn’t the only one hearing it.

Through all the strange happenings though, I must say, I never saw anything that might account for a ghostly apparition directly, only out of the corners of my eyes. Also, no one was ever physically harmed or threatened that I know of.

The closest anyone came was that friend of mine who at one point was in the back alone when he began to hear the whistling. By that time, we were all used to it and so he kept on working, trying to ignore it.

But as he did, it kept getting closer to him until he genuinely became scared, at which point he yelled out loud “Stop it!” As soon as he yelled the words, he said he heard a loud, angry whistle come right at his face.

It sounded as if someone had whistled directly in his ear! At that point he ran out to the floor scared as hell and found me moving mattresses around.

Now, I wasn’t back there so I don’t have first-hand proof that it happened, but this guy was not a liar. Also, since I heard the whistling on many occasions, I had no reason not to believe him. It took him a couple of weeks before he agreed to work in the back alone again.

The furniture store used to be an Eagle’s Food Store a long time ago before a few walls were knocked down and it became the furniture store. There were rumors of a worker being killed on the job when the store was originally built, but I have no idea if that is true or not. All I know is that I am not as skeptical as I was before.

Nickolie, Tucker and the Vanishing House