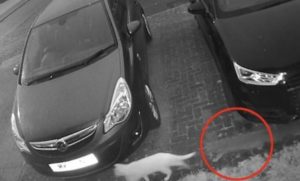 Juliet Byrd, a 53-year-old resident of England, is sure that a ghost cat was caught on a CCTV camera, reports Daily Mail.

This incredible incident took place on July 13th in Essex. The video, taken by a camera in the backyard of her house, shows how an incomprehensible ghostly creature, similar in shape to its relative, follows the cat named Topsi.

The emerging creature looked somehow disembodied, and Juliet immediately decided that her cat was followed by the ghost of his friend, who had died a few weeks ago.

The woman says that on the one hand it is simply stupid to think so, but on the other hand she cannot find another explanation for what her eyes saw.

The phenomenon of animal hauntings is nothing new. As long as there has been a belief in a spiritual realm there has been reports of these fascinating ghosts. Ancient Egyptians held strong beliefs that their souls continued in the afterlife.