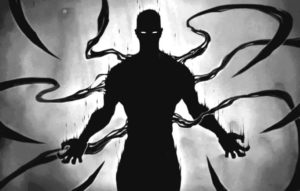 Anomalien.com reader John her story about an encounter with the unexplainable.

When I was a boy my mother and I lived with my grandfather who had a farmhouse in a rural location in southwestern Pennsylvania. My grandfather was a handyman who also worked a small blacksmith shop in his old barn. My grandmother had died before I was born and my father had also passed away while serving overseas in the U.S. Army.

Beginning in the summer of 1946 we noticed strange howling sounds coming from the woods that surrounded the property. The activity came at night and was very frightening when the howling came close.

The sounds didn’t seem to bother my grandfather though my mother and I were shaken when it would begin. The sounds continued off and on for about a year but we never noticed any animals. My grandfather and I would hunt for deer and squirrel in the woods during the colder months but we never saw signs of unusual animal activity.

He walked to the door, lit his pipe and said nothing. After a minute or two he turned around and got back to work. About that time this thing moved into the woods and disappeared. I couldn’t judge how big it was but it sort of reminded me of a magazine picture I had seen of a large ape that was said to inhabit in the Asian jungles.

Later that evening I told my mother what I had seen. She was shocked because she knew I wouldn’t lie to her and that the howling sounds had been closer lately. I also told her of my grandfather’s response when I pointed the creature out to him.

She immediately stood up and walked into the sitting room in order to ask my grandfather what it was. He started to shake his head slowly and said that he was hoping that we wouldn’t ‘see it’ because he was worried we would be scared and leave him.

After assuring him that we’d never leave him my mother again insisted that he tell us what this creature was. He looked away, took a deep breath and said ‘it’s a Dark Walker’ and said that it had lived in the woods for many years.

He said the native Indians called it ‘Stone Spirit’ and they thought that it was an evil spirit who would appear when someone was about to die. The last time he had seen the ‘Dark Walker’ was the night before my grandmother died. My mother was skeptical of the ‘harbinger of death’ angle but she sensed that there was something unnatural nearby.

The howling continued each night though we hadn’t seen any signs of the ‘Dark Walker’. One warm evening we were sitting on the back porch. There were a few howls but it seemed like the sounds were further away. We were listening to the radio when all at once my grandfather stood up and looked out towards the barn.

He turned to me and said ‘John, go get my pistol and ammo – hurry now’. I ran into the sitting room and grabbed the .455 Webley revolver and a handful of bullets from the old steamer trunk. I handed it to him and watched him load the gun. He then picked up a hatchet and slid it in his pants belt.

‘Now both of you get into the house – now!’ We were in the kitchen looking through the screen door and watched my grandfather walk slowly towards the barn. We saw him turn and walk out of sight into the dark. I decided to grab my shotgun and keep it nearby. After a minute or so we heard three gunshots and a blood curdling scream emanate from the woods near the barn. Then it suddenly stopped and there was complete quiet. We were frozen and wondering if we should go look for my grandfather. A few seconds later we heard him yell ‘stay in the house until I come back.’

I heard the pickup truck start up. I looked out the storage room window and saw my grandfather drive to the back of the barn and park. Several minutes later he backed up and drove by the side of the house out onto the road. I could see that there was something in the back covered up with a tarp. It was getting late so my mother told me to go to bed.

The next morning I came downstairs and sat beside my grandfather who was reading the newspaper and drinking a cup of coffee. My mother was sitting at the other end of the table staring at my grandfather. Not long later she said ‘well dad, tell him’. My grandfather put the paper down and looked at me. ‘I killed the Dark Walker’. That was all he said. My mother told me not to tell anyone and that the matter was closed.

We never talked about it again. My grandfather lived another 15 years and my mother stayed with him until his dying day. When I grew older I moved away and raised a family. I would return home to visit each summer – and never heard another howl.