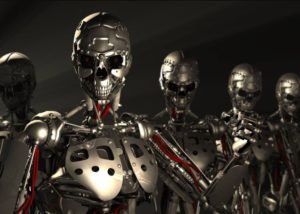 Logan Streondj, a software programmer and author, wanted to figure out when the population of robots will reach that of humans for his book titled “A home for robots or-else artilect war.”

To do this he had to compare human birth and death rates with the number of robots built and decommissioned each year.

“While homo-sapiens live on average 70 years, according to World Fact Book, robots have a life expectancy closer to 10 years, so would need to produce about seven times more robots per year in order to have the same number as humans,” he wrote.

There will be as many robots as there are humans within the next 24 to 39 years, this means robots would begin to outnumber humans by around 2040.

“Intuitively it would seem to be around the time when there are as many or more robots than homo-sapiens on the planet, at which point there may be enough sufficiently intelligent robots to demand a space for themselves,” he said.

“The most likely time-frame for an artilect war style conflict would be between 2040 and 2055.”

An artificial intellect (or “artilect”) is a computer intelligence superior to that of humans in one or more spheres of knowledge, together with an implicit will to use the intelligence, according to AI researcher Dr Hugo de Garis.