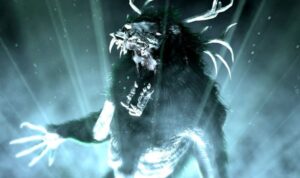 Wendigo is a Native American name for a Winter Cannibal Giant in northern North America.

The name derives from the Ojibwa language for “Wiindigoo”, originally used by the Algonquian Indians tribe of the northern forests, they believed that Wendigo were cannibalistic giants with supernatural powers, one of which was the ability to possess people and turn them into Wendigo.

Based on witnesses descriptions, they’re typically larger than a human but not too much, with height around 6–9 feet, sometimes they’re covered in matted white fur, and other descriptions characterize them as practically hairless.

Often, especially in the north country, they are missing some of the body parts that are most vulnerable to frostbite: toes and parts of the ears and nose. The creature has red or black and staring eyes also has large fangs and claws.

Seen most often in winter, and it can swim in cold rivers. Runs swiftly. Has a strident voice. Sometimes rubs its body with tree resin and sand. Eats people, especially children.

There’s plenty of lore claiming that the Wendigo can possess the spirits of hunters, jumping bodies, perhaps, when its own has started to break down. 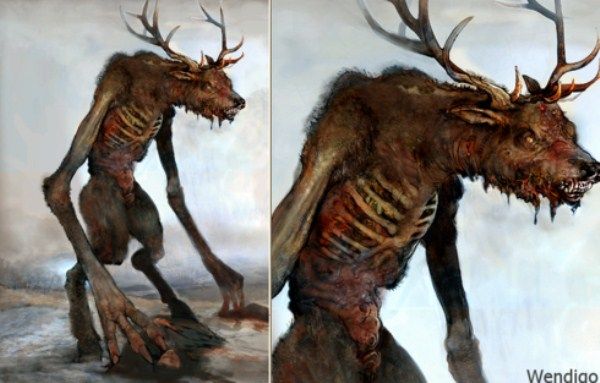 According to Algernon Blackwood’s story “The Wendigo”, originally published in 1910, a pair of hunters encounter a creature in the Canadian woods that they had hoped was only a legend. Blackwood’s Wendigo is a mystical creature, representing the lure of the wilderness.

Its voice resembles the sounds of the wild – falling water, wind, the call of birds and beasts. Grasping its victim, the Wendigo runs at such speed that the poor victim’s eyes bleed and his feet burn. It can take great leaps or run along the tops of trees.

It will fly, repeatedly dropping its prey, as a hawk drops a fish, over and over again until it is dead. If the victim of the Wendigo does return to civilization, it is as a shattered shell of the individual, his mind crushed by the terror of the dark woods.

As with many of the creatures brought to life in the pages of gothic horror fiction, Blackwood’s Wendigo is inspired by a beast already present in folk mythology. In this case, Blackwood draws upon the folk tales of the Algonquian tribe of Native Americans.

In some versions of these tales, the Wendigo is an evil spirit that influences weak and susceptible individuals to engage in horrific behavior. Specifically, when facing extreme conditions and starvation, the Algonquians believed that the spirit of the Wendigo may transform an individual into a cannibal. The victim then becomes a Wendigo.

“It is something like a werewolf on steroids. It stands more than six metres tall in its bare feet, looks like a walking corpse and smells like rotting meat. It has long, stringy hair and a heart of ice.

“Sometimes a Wendigo breathes fire. It can talk, but mostly it hisses and howls. Wendigos can fly on the winds of a blizzard or walk across water without sinking.

“They are stronger than a grizzly bear and run faster than any human being, which is bad news because human flesh happens to be a Wendigo’s favourite food. A Wendigo’s appetite is insatiable. Indeed, the more it eats, the hungrier it gets.”

Loren Coleman suggests that Native American folklore has a layer of truth that should not be dismissed. Stories of Wendigo, he claims, may contain information about actual encounters between native peoples and a group of large, hairy hominids. He writes:

Though these creatures were called by many different names by the various tribes, they are, according to Coleman, the beings described by the Algonquians as Wendigo.

In Coleman’s examination of native folk tales a picture of the Wendigo begins to develop that looks more like a flesh-and-blood primate than like the mystical otherworldly being of Blackwood’s tale. The Wendigo that Coleman describes are large, hairy creatures with big hands and bear-like faces.

They wear no clothes and do not employ the bow, instead using stones for weapons – hence the origin of the term ‘Stone Giants.’ They are cannibals, though it is unclear whether this means that they eat members of their own group or that they eat human prey.

Coleman suggests that accounts of human encounters with Wendigo can be found not only in native folk tales but also in stories told by early European settlers to North America. One such European encounter even comes from the pre-Columbian period:

“Leif Erickson wrote in 986 A.D. of encountering monsters that were ugly, hairy, and swarthy with great black eyes. In 1603, on Samuel de Champlain’s first voyage to eastern Canada, the local natives informed the explorer of the Gougou, a giant hairy beast that lived in the northern forests and was much feared by the Micmac.

A London Times article of 1784 records the capture of hair-covered hominids by local natives, near Lake of the Woods, in south-central Canada.

In the Boston Gazette of July 1793, a dispatch appeared from Charleston, South Carolina, May 17, 1793, concerning a creature seen in North Carolina. The account centers on Bald Mountain, where the local residents call it Yahoo, while the Indians give it the name of Chickly Cudly.” (Coleman, Crypto, April 7, 2001)

Coleman, then, not only brings the Wendigo out of fiction and folklore to stalk the forests of eastern Canada, he also sees the creature as a biological creature, an undiscovered primate.