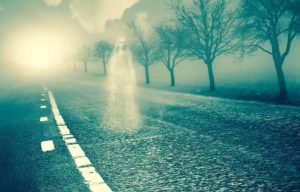 Local legend tells of a newlywed couple who swerved off the road in the 1950s into a ditch on Brownville Road.

The bride and groom were returning from their honeymoon and driving along the Brownville Road near Millinocket, Maine, and when they were nearly home, for reasons unknown, the car swerved off the road and down an embankment into a ditch. The newlywed husband asked his wife to stay in the car, whilst he would go and try to get some assistance. When he returned, his wife was nowhere to be found, never to be seen again.

To this day people say that if you are driving down the Brownville Road, often you can see her ghostly apparition dressed in white, walking along this stretch of highway either on or near the green bridge. Others say that she appears when the weather turns nasty and there is a dense fog or mist.

There is one account of a group of curious people interested in the legend, that parked on the bridge with their lights out during a dense fog, hoping to get a glimpse of “The White Lady”.

They got a little more than they bargained for however, because when they turned the lights back on, the windows had fogged up as you may expect with a lot of people in the car. However, on the outside of the car in the condensation that gathered on the windows, there were hand prints all over.

Rumour has it that you can still find the wreckage of the car that crashed that night long ago, still in the ditch, on its roof, untouched. The Car is not however on the new Brownville Road, but the old one, but most people do not know about the old dirt road, to the left of the Green Bridge.

Maybe, whatever happened to her on that dreadful night, sees her spirit return to the location waiting for her new husband to return with the promised help.