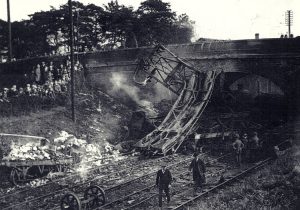 On October 13th 1928 a mail train carrying 60 passengers was making its way from Leeds to Bristol but never reached its destination. Thick fog obscured a red signal at the Charfield railway station in Gloucestershire, and the train crashed into a freight train. Gas used to light the carriages ignited, and four carriages were burnt out.

The driver of the mail train was charged with manslaughter, but was subsequently acquitted. Sixteen people died in the crash including two young children, a boy and a girl, who were burned so badly they couldn’t be identified.

No-one came forward to identify the children which in itself was strange, but the mystery deepened after a memorial was built in remembrance of the victims. A woman dressed all in black would visit the memorial several times a year, including every anniversary of the disaster, until the late 1950s when she presumably passed away herself.

On that occasion a member of the media tried approaching her and she ran off, and wasn’t seen again.

There are numerous theories and myths as to the children’s identities including that they were illegitimate children of a royal family whose existence (and deaths) had to be hushed up, that they had been abandoned by their mother and put on the train, that the bodies were those of two waifs who used to sleep under the railway bridge where the crash occurred, that they were actually adults of short stature (such as jockeys) or even that there had been no children on board and that the remains were actually ventriloquist dummies.

However, according to the Inquest, two young persons were among the dead, and a porter who had inspected tickets at Gloucester station (the last stop before the crash) recalled seeing two young persons of “reasonable means” traveling unaccompanied.

To this day there are sightings of the ghosts of the two children, stood hand in hand near the crash site.

Many more pyramids are hiding in the sand – Why are they not excavated?