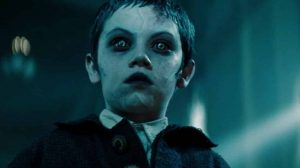 The ghost story of the boy with the brass buttons dates back to 1889 and is about a family that purchased a rather old fashioned house in Stuyvesant Square, Philadelphia. The couple started working on refurbishing the whole place.

With a lot of time on her hands and very little adult supervision, their youngest daughter started occupying herself by spending a lot of time in the attic that had been converted to a playroom by the previous owners.

After a few weeks the downstairs rooms of the property had been completed, and the mother realized she had been neglecting her daughter, so she attempted to try and spend some quality time with her. However the little girl appeared somewhat distracted and kept stealing away to spend time alone in the attic.

When quizzed about why she liked to spend so much time alone in the attic, she replied that she goes up there to play with a little boy who had shiny buttons. As her father used to be a sailor, her parents soon realized that the boy that their daughter was talking about had a child’s sailor suit on.

The girls father started making enquiries about the family that lived there before and eventually got to know from the neighbors that the family had three children and that their youngest son had apparently drowned in the river.

He had been born retarded and the father was deeply ashamed of him, and tried to prevent him from being seen outdoors. According to neighbors, the parents said the boy often used to sneak down to the river to play then one day fell in and drowned.

The body was never recovered but the young boys cap was found floating in the river. The family shortly thereafter sold their house and moved.

The girls fathers suspicions by then thoroughly aroused accompanied his daughter to the attic, and asked her where the boy came from, and she pointed to the boarded up fireplace.

He had workmen brought in to rip the fireplace out and found the corpse of the little boy dressed in a blue sailor jacket with rows of brass buttons down the front.

An examination revealed that the boy had been murdered by a violent blow to the head.