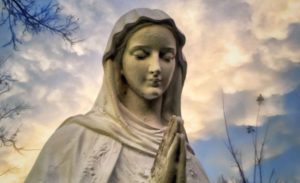 A strange situation is unfolding these days in a Ugandan village where the Virgin Mary appeared to a local resident.

Because of this, thousands of people come here to make a pilgrimage and look at this place, while local authorities worry that this could cause a new outbreak of coronavirus infection.

Maracha is a small village that is part of the Minako settlement, Yiwu Sab. Previously, it was an ordinary and lost village in the Ugandan wilderness, but now thousands of pilgrims come from the nearby city of Arua, as well as from the neighboring Democratic Republic of the Congo.

According to local media, on May 2, 2020, a 42-year-old resident of Marachi named Philistera Lekuru, under an avocado tree near her home, saw the Virgin Mary, and then talked to her.

The Virgin Mary told her to begin 14-day fasting, and at the end of the month to wait for her second appearance with new tips.

Lekuru herself says that she didn’t tell anyone about it, however, rumors somehow spread very quickly and crowds of pilgrims immediately reached the house of Lekuru.

First of all, they wanted to see the very avocado tree where the meeting took place. Some of them later said that they also saw the Virgin Mary under a tree or in its foliage. After that, the pilgrimage here began to grow like a snowball.

Eyewitnesses said that the Virgin Mary “turned her face”, and her hands were wide open, as if she was preparing to hug them. In addition, people say that they saw a strange phenomenon of yellow rings around the sun on the same day when the Virgin Mary appeared to Lekur.

Now, a police detachment is on duty day and night near Lekuru’s house, as the authorities are afraid of an epidemic outbreak due to crowds. Despite this, people continue to come here by hundreds and thousands of people.

Meanwhile, the head of the local Catholic Church became interested in what happened, and now he is trying to find out if there was really something divine or all this in the case of mass hysteria.