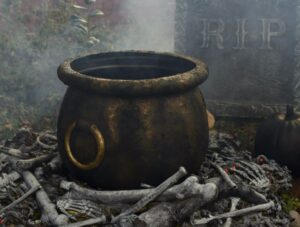 In the Manor Farm’s cellar of North Lincolnshire, there is an old iron cooking pot rumored to be cursed. It has been sealed there for 35 years by the previous owner.

At the end of the 19th Century, the farm was haunted by an evil spirit so badly, until the owners exorcised the spirit by trapping it in an old cauldron- which was filled with pins and earth- and sealed it away in a small cellar.

Legend said that if the cauldron were removed from the cellar, the evil spirit would be free and haunt the farm again.

According to a young lady who lived at the farm in the late 1880s, she was told a folklorist named Mabel Peacock of Lincolnshire that the farm was haunted by a goblin called Hobthrust. A Hobthrust is a household goblin reportedly sighted in the north of England.

This one is similar to the Yorkshire Robin-Round Cap or Scottish Brownie. He always appears at midnight carrying a cauldron and stirring it when he walked around. It was contained children’s thumb bones and sand.

Within an hour he was run over and killed by a hay wagon. Several days later, the cauldron was found by an unknown man, he retrieved it from the pond and returned to the cellar. He died mysteriously within few hours.

The third victim of the curse was Charles Atkins (6 years old), whose family lived at Manor Farm in the 1930s. Few hours after touching the pot he was also killed by a hay wagon, similar to the first victim.

In 1975, the late John Atkins (Charles’ older brother), spoke about the incident in a local newspaper. He said, his father always warned him and his little brother to stay away from the cauldron. But when he and Charles were playing in the cellar, Charles touch it. The next day while they were playing at the fields near the Humber river, Charles was hit and killed by a wagon.

There was an old legend in the village about the cauldron and they were told that it contained the dwarf’s ashes who was killed at Thornton Abbey. Also, there was a mysterious tunnel between the Abbey and the cellar.

A few moments after the dwarf was killed, he was brought by the monks through the tunnel and his remains were disposed of in secret. After Charles Atkins’ death, the cellar containing the cursed cauldron was bricked up, and it remained there for 35 years.

In 1974, John Morton a local business man bought the farm and began extensive renovations. He wanted to fixing the old cellar by breaking the brick of wall which sealed the cellar’s entrance.

However, after hearing the legend, the workmen refused to go anywhere near the corner of the cellar where the old iron pot had lain undisturbed for so long. Later a local minister named Rev. Bob Kenyon, who believe in the curse, offered to remove it. He convinced that he would be immune from the evil spirit.

However, Mr. Morton decided to seal it away by having the iron pot placed in a steel cage and buried in the cellar. With the help of Alfred Darwood, a local builder, the cursed cauldron has remained undisturbed.

He said, no one actually believes the legend about goblin, dwarf, and the cursed cauldron, so he and Mr. Morton put the steel plates around it without even touching or moving the pot.