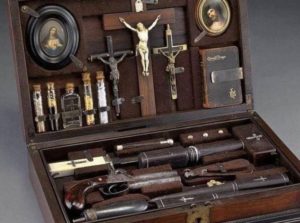 One of the most intriguing and mysterious items for sale in the 19th century involves the manufacturing and selling of vampire killing kits. Several vampire hunter kits have turned up in recent years, and some have sold for large amounts of money, (One sold for $12,000 at Sotheby’s), even though the true origin of these vampire kits is shrouded in mystery.

Some travelers in the 19th century would purchase vampire hunting kits in preparation for their travels to Eastern Europe. Interestingly, some vampire hunting kits pre-date Bram Stoker’s Dracula and other written accounts of vampires, pointing to the strong oral history component of the undead bloodsucker

Although it can’t be proven, there does seem to be historical evidence that vampire hunting kits became popular in western Europe after the release of Bram Stoker’s Dracula in 1897.

Superstitious travelers would supposedly purchase these vampire killer kits in preparation for their travels to Eastern Europe, although more likely in the majority of cases, they were purchased as souvenirs for rich novelty collectors. 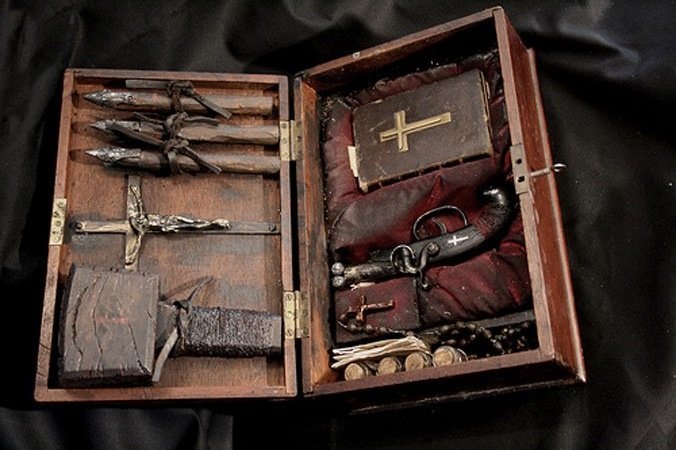 The typical vampire-hunting kit, consisted of a walnut box with a hinged lid, housing such items as a wooden stake and mallet, crucifix, pistol and vials of garlic powder, a bible, silver bullets, and glass vials that held various concoctions to ward off vampires.

Over the years, some have said they were authentic, whilst others insist they were made as souvenirs for gullible tourists who descended upon Transylvania following the publication of Bram Stoker’s Dracula.

At the blog of the British Library, Jonathan Ferguson, the curator of firearms at the United Kingdom’s National Museum of Arms and Armour (one of the oldest museums in the world) describes his investigation into the authenticity of these kits, and why he chose to put one on permanent display:

“I suspected that they were indeed novelty items, but were rather more recent than many believed. I conducted a survey of the folklore surrounding ‘real’ vampires, that is, dead bodies exhumed by a troubled community and ritually ‘killed’ as scapegoats for whatever malaise might be affecting people. 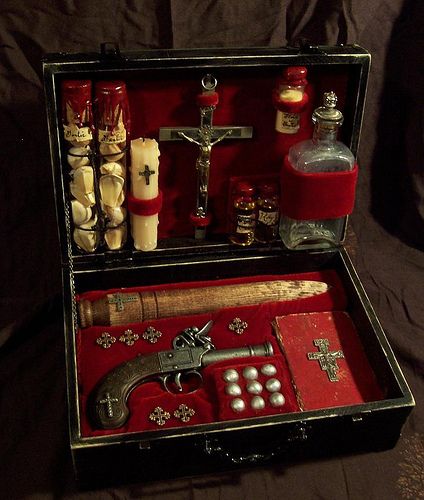 “Nowhere was there evidence to support real vampire slayers carting about one of these kits. I persisted, revisiting the fictional stories and movies of my childhood and beyond, noting the development of the various ingredients in the typical vampire killer’s toolbox.

“It became clear that the kits with their focus upon silver bullets, were very unlikely to have existed prior to about the 1930s at the earliest. Though constructed from antique boxes and contents, they were most likely not produced until the era of the classic Hammer vampire movies.

“Other kits are harder to pin down in terms of date and could be older. Some this might come as a disappointment, or even as a reason to decry the kits as fakes as some do. Would-be buyers should certainly not purchase one under the impression that they are buying a genuine Victorian antique though”.