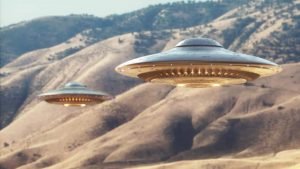 In 1974, a very strange incident took place in Yalta, Near the Iograf Ridge, Ukraine on July 22 at 12:40. A loud bang was heard. At that moment, there were several tourist groups in the mountains, with a total number of about 60 people.

Returning to their bases, they all spoke as one about the same thing: “The disc-shaped object literally crashed into the mountain.“ The noise spread across the outskirts. And after a few seconds, the UFO, as if nothing had happened, rose into the sky and disappeared from sight.

Researchers, ufologists, and police became interested in this incident. Officials were to establish that no private jet or other aircraft had crashed in the mountains.

Nothing unusual was found at the site of the alleged UFO crash. Because of this, law enforcement officials believed that there was no flying object.

But enthusiasts and ufologists have discovered something. Small particles of “whitish paint”. Ufologists rationally considered that if there was a collision, then these paint flakes could belong to a UFO.

As a result, about two dozen samples of this substance were collected. Remember, this was 1974. Alas, it was possible to investigate the paint only after 4 years, when money was accumulated for various experiments.

The samples were sent to various research institutes. It turned out that this “paint” has incredible properties. For example, the temperature of its combustion or melting is about 2500 degrees. Even today, chemists have not been able to achieve such an effect. The average burning temperature of paint for spacecraft is 800-1300 degrees.

In addition, the researchers were surprised by the chemical composition and structure of the substance. When in contact with an oxygen-free environment, it hardened up to 10 points on the Mohs scale, this is with considerable lightness – about 1.5 grams per square meter.

But, when interacting with water, the paint was covered with cracks, under a microscope it was possible to see microexplosions. The connections of the chemical elements were broken.

In total, 48 different chemical elements and minerals were found in the composition of the substance. However, none of them were radioactive. Such a complex composition simply amazed those who studied the mysterious “paint flakes”.

The verdict was unambiguous – paint from the skin fell into the hands of the researchers, or maybe not paint at all, but simply the substance from which the flying apparatus of an extraterrestrial civilization was created.

Crimean ufologist Anton Anfalov said that even in the pre-war years, the Iograph Ridge was attracted by the fact that incomprehensible vehicles flew here.

Today, the registration of UFOs in this region is approximately 12-15 cases per calendar year. Among researchers and conspiracy theorists, there is a version that there is an alien base under the ridge. However, this is just a hypothesis.

But the fact that it is here that the appearances of unidentified flying objects are often observed speaks for itself.

President of the World Association “Ecology of the Unknown” Alexander Semyonov, who has been studying UFOs since the mid-60s of the last century, states that the 1974 case is irrefutable and one of the most provable, since physical samples of extraterrestrial origin were obtained.

And all other cases can be both added and subtracted, it no longer matters. Arrivals of unidentified flying objects to the Iograf Ridge are regular, and what is their reason remains to be seen.