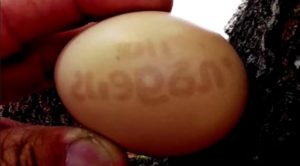 The Quixadá region in Brazil is known for its many UFO sightings and abduction cases and now something mysterious has happened again, reports ufosightingshotspot.blogspot.com.

A chicken laid an egg in December 2019, with numbers and symbols depicted on the shell Farmer Raimundo Aluceno, the animal’s owner, speaks of an egg that has numbers and letters, as if it were “registered” by the chicken.

The news has gone viral and many of the region’s residents wonder what that might mean.

“I do not know how to explain it. This egg is a real mystery”, said Raimundo Aluceno.

It is not yet known how strange inscriptions appeared on the egg.

Many try to decipher the numbers and symbols and believe it points to aliens and the connection to extraterrestrial beings that frequently visit the region.

Some claim that the egg may depict an apocalyptic date.