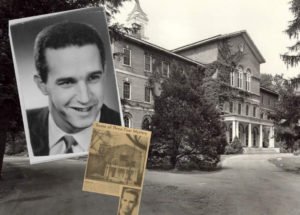 Miami University has all the ingredients for a great ghost story. It’s old, isolated, perched on the top of a hill, and was once the site of a mysterious disappearance with rather unusual circumstances.

While, like all schools, the tales of hauntings here are plentiful, today we will just focus on one building, the now demolished Fisher Hall, and it’s predecessor, the Marcum Conference Center.

Fisher Hall was an imposing three story building that was initially built in 1862 to stand independent from Miami University as the Oxford Female College. Unfortunately, the college was a failure and folded with the death of its founder in 1882.

By 1925, after housing a couple of other ventures, the building was absorbed into Miami University for use as a men’s dormitory. It was during this tenure as campus housing that a bizarre incident took place which still haunts the university to this day.

It was an unusually cold and snowy day on April 19th, 1953 and Ronald Tammen, Jr. had just finished playing bass fiddle with a college dance band named the Campus Owls. He returned to his second story dorm room around 8pm and planned to get a little studying done before going to bed.

There was a hitch in his plans, though. Someone had placed a dead fish between his sheets. While this seemed a strange prank to play on someone, it was easily solvable and Tammen went to the hall manager and received fresh linens. A few of his fellow residents waved to him as he walked back to his room with the clean sheets.

At 9:30pm Tammen’s roommate returned to find the door to the dorm room open and radio playing, but no sign of his friend. Tammen’s watch, wallet, keys and open text book sat on the desk, so the roommate assumed that he had just stepped out for a moment and would return shortly, but Ronald Tammen would never return.

As the hours stretched into days it became clear that something had gone very wrong for the young sophomore.

Ronald was a well liked and well adjusted student at Miami. In addition to playing music in the Campus Owls he was a resident assistant on his dorm floor, a varsity wrestler and in good financial and academic standing. For him to vanish of his own accord was unthinkable.

One terrifying explanation that had to be on everyone’s mind at the time was the building’s ghosts. You see, even during Tammen’s time at Fisher Hall the dormitory was thought to be quite haunted.

Aside from the wandering spirit of the building’s namesake, Judge Elam Fisher, it had been used as an Insane Asylum from 1882 to 1925 and was said to be haunted by the patients from this era.

Those who lived there would report strange sounds, shadows darting past windows and objects mysteriously vanishing then later being found in plain sight. Straight jackets would also turn up from time to time.

Given the uncharacteristic disappearance of Ronald Tammen, it was suggested that a sudden onset of mental illness had overtaken him, which made the buildings history and reputation of being haunted by its former patients instantly more ominous.

In the days following Tammen’s disappearance several other odd revelations came to light.

On the night Tammen went missing a woman in a nearby town reported that a young man fitting his description knocked on her door around midnight asking for directions to the bus stop. She described him as having a dazed appearance, with vacuous eyes, a smudge of dirt across his face and wearing no coat – which she found odd considering the freezing temperature.

This sighting led to the theory that Tammen had suffered a bout of dissociative amnesia. It also supported the theory that he had been the victim of a hazing ritual for his fraternity, Delta Tau Delta.

Fitting into the hazing theory, Tammen’s new pillowcase was missing from his room. Did he just forget to grab one while getting clean sheets or was it used to hood him? It wasn’t uncommon for initiates to be kidnapped then dropped off at a distant location and expected to find their way back.

Another bizarre detail emerged when the Hamilton County Coroner came forward to claim that Tammen had visited him to request a blood test 5 months before he went missing. This was peculiar because he could have easily obtained a blood test from the medical facility on campus rather than drive to Hamilton and why did he go to a coroner for a blood test?!

The coroner noted that was the only time in his 40 years of experience where someone had made such a request. This led some to theorize that he had unintentionally impregnated a lady friend and that this had caused him to flee.

The case became even stranger on a November night in 1953, seven months after Tammen’s disappearance. Students had just returned from Thanksgiving break and were settling in when the sound of a young man singing rolled across the campus grounds.

A group of students went outside to silence the noise but could not find it’s source. Suddenly, a tall and thin figure dressed in all white emerged from the bushes.

Hoping to solve the mystery of the missing student, the group chased the apparition, which easily outpaced them with what was described as “superhuman speed” before vanishing into the woods. It was incidents such as this that earned Tammen the nickname “The Phantom of Oxford”.

In 1963, and again in 1975, a student group invited a Spiritualist to Fisher Hall to conduct a seance that would hopefully solve the mystery of the missing man. In both instances, the Medium claimed to see a young man studying in his room when he heard a noise that “disturbed” him.

Going into the basement to investigate, he encountered two men, one of whom struck him from behind. That is where the Medium’s vision ends.

In 1958 the upper floors of Fisher Hall were deemed unsafe and closed off, though the first floor continued to be used as a theater space. During this time staff would report unexplained footsteps and muffled voices coming from empty halls.

Visitors would get a sensation that someone had walked into the room with them and, as always, the shadow figures and strange displacement of personal objects continued. In 1968 the building was abandoned and by 1978 it was demolished to make way for the new Marcum Conference Center.

Strange phenomenon is still reported in the new building (which is named after the victim of a tragic car accident, by the way) that sits on the site of the former residence hall / asylum and Ronald Henry Tammen Jr. is still missing. Or rather, the whereabouts of his physical body still remains a mystery.