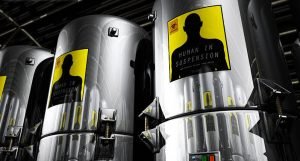 Seeking a way to cheat death? A company will freeze your mortal remains in a liquid nitrogen vat, reports nypost.com.

Known as KrioRus, the organization, based just outside the Russian capital Moscow, currently has about 71′ patients’ who agreed to have either their brain or their entire body frozen in the hope that science will eventually find a way to return them to life.

One client-Alexei Voronenkov-had already frozen remains of his 70-year-old mother after her death and wishes to become a resident at the facility when he also eventually dies.

“I did this because we were very close and I think it is the only chance for us to meet in the future,” he said.

“I hope one day it reaches a level when we can produce artificial bodies and organs to create an artificial body where my mother’s brain can be integrated.”

It currently costs Russian clients $36,000 to freeze a body and $15,000 to preserve the brain, but at a slightly higher cost, the services of the company are also available to foreign customers.

But is there really a chance to bring a frozen brain back to life one day?

Many scientists have heavily criticized KrioRus and other company’s like it for taking money from people despite the fact that there is no evidence to suggest that they can ever be revived.

Evgeny Alexandrov, who is head of the Russian Academy of Sciences’s Pseudoscience Commission, described the cryonics industry as “an exclusively commercial undertaking that does not have any scientific basis” and said that the whole premise “is a fantasy speculating on people’s hopes of resurrection from the dead and dreams of eternal life.”

But, with many more people queuing up to be frozen, it seems-fantasy or not – that the possibility of being brought back to life far into the future is too attractive to ignore.