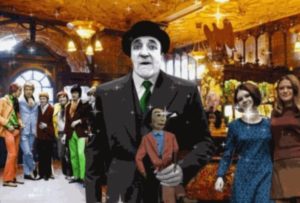 There have been so many famous visitors to the Philharmonic pub over the years. Bing Crosby enjoyed a drink there after a charitable clandestine visit to the Convent of Notre Dame on Hope Street in the 1950s, and even Superman – the late Christopher Reeve – drank at the pub around the time of his visit to the Everyman Theatre in the early 1970s.

There’s also a largely forgotten claim that JRR Tolkien sometimes downed a few pints of beer at the Phil in the 1950s during his visits to Lancashire (where his sons were being schooled).

Shining bright among the glittering pantheon of eminent visitors to the pub are the Beatles, who occasionally supped there in their student days, but there have also been other phenomenal performers who have graced the premises of the Phil – and one of these was “Mister Impossible” – a sort of cross between Tommy Cooper and Derren Brown – who pulled off many baffling wizardly tricks at the pub during his self-appointed tenure in the late 1960s.

Impossible wore an immaculate black suit, satin green tie and a bowler hat (which he made his collection with), and this barroom Merlin usually carried a rather creepy doll named Razzmatazz that could speak, sing and tap-dance – even at some distance from its ‘operator’ – but just how this was achieved remains an unfathomable mystery.

Impossible told very surreal jokes, did all the usual magician’s card tricks, and apparently read minds too. He would also roll up a broadsheet copy of a newspaper, make cuts to it, place it in a plant pot and play snake-charmer music on a pungi as the newspaper stalk grew and sprouted leaves until it reached the ceiling.

The skeptics said the newspaper plant trick was all down to hypnotism, and the cynics also maintained that hypnotic influence was responsible for Mr Impossible’s levitation routine as well as his eerie ability to exhale cigar smoke that would coalesce into the faces of deceased people, but harder to explain was the magician’s generation of extra limbs – known as ‘pseudopods’ in the psychic world.

Mr Impossible would reach out from under his coat with an extra arm and shakes hands with people. Two Liverpool University students, Pru and Judy, became obsessed with discovering Mr Impossible’s secrets, but could never catch him out.

Judy eventually came to the conclusion that the pub entertainer was no mere illusionist but a man with genuine miraculous abilities – perhaps even someone working in league with the Devil. Pru thought her friend’s notion was ridiculous – and Pru certainly didn’t believe in the supernatural and the concept of a Devil.

Then, one Saturday evening there was a knock at Pru’s flat on Percy Street. She got out her bath, wrapped herself in a towel and went to the door. ‘Who is it?’ the student asked, unwilling to open the door because she only had a towel wrapped around her naked body.

She was supposed to meet her boyfriend John at the Ye Cracke pub at 8.30pm and she wondered if he’d decided to call for her instead. Pru thought she heard what sounded like a child’s voice shouting ‘Help me!’

‘Hello? Who is that?’ she asked, her ear to the door. No reply came, and worried that some child might be lost or in some danger, the student opened the door – and she got quite a start when she saw who – or what – had called at her flat.

It was Mr Impossible’s puppet Razzmatazz. He stood there, twelve inches tall, wringing his hands as he looked up at Judy with a sad expression. The doll cried: ‘Help me, please! I’ve run away from him Pru! I’m not a real puppet! He trapped my soul in this doll! Please hide me!’

Pru gathered the towel around her thighs. She knew it was just a doll, and yet she reflexively thought of it looking under the towel, and stepped back. Unsure what trick was being played by Mr Impossible, Pru stood there, gazing down at the little figure, a little annoyed at leaving a hot bath for this nonsense.

‘I escaped but he’ll be looking for me,’ the doll said in a quivering voice. Pru believed it was all a ventriloquism act and that Mr Impossible was hiding somewhere on the landing. She hissed a swear-word under her breath and shook her head.

She was about to slam the door on the doll – which, she reasoned, must be remotely controlled by the eccentric trickster, when Razzmatazz moved forward, with his tiny left foot inside the door of Pru’s flat. The little man said: ‘Do you know what Mr Impossible is? This might scare you but – ’

Razzmatazz never got to tell Pru. A hammer swung from somewhere just to the right of the doorway in the hall and it smashed down repeatedly on the puppet, and as Pru screamed, a hand in a white glove grabbed the shattered doll and the student heard someone run off.

All that remained of Razzmatazz was a little doll’s eyeball. Mr Impossible was never seen again by anyone after that night, and for many years, Pru had recurring nightmares about that hammer smashing in the head and body of Razzmatazz.

The student could not even bring herself to visit the Philharmonic public house after the weird incident, just in case she met Mr Impossible.