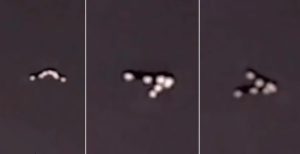 This year, for the third time above Texas, a triangle-shaped UFO was spotted and filmed in a stunningly clear video.

The unexplained “spaceship” was first seen on New Year’s Day in Houston, before being seen over the highway in Bogata last month. On March 28 the object has been seen above Seguin.

The video shows a group of seven lights traveling through the night sky in a triangle shape. The lights move on their course and disappear out of sight after a few moments.

Sightings usually take place at night. These objects are often described as having pulsing colored lights that appear at each corner of the triangle.

Many claim the triangular UFOs are an example of a top-secret government aircraft fleet known as the TR-3B.

The TR-3A Black Manta is the name of a surveillance aircraft of the United States Air Force, speculated to be developed under a black project.