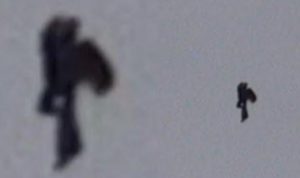 Bizarre footage shows a baffling object floating in the sky, and some commentators presume it might be a flying humanoid.

The first video to garner widespread attention was submitted to the Mutual UFO Network (MUFON) the day after it was filmed.

According to the report, the sighting took place at approximately 5 pm.

“We first noticed it while sitting in our backyard. A black object moving slowly from [northeast] to [southwest]; very strange shape looking like a figure with wings. My wife commented that it looked like a giant bumblebee. We used binoculars and video taped.”

Confirmed odd shape looking like the object was spinning as it was moving. It was an overcast evening but the object was very defined in black. Clouds were moving the opposite direction. No noise could be heard, moving under clouds about a mile up. This object looked like a giant transformer.”

Speculation regarding the object quickly turned to flying humanoids once the footage was shared to social media, specifically the winged being known as Mothman.