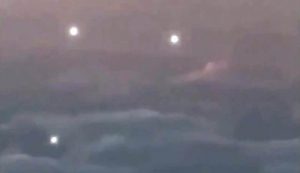 Incognito man reports that not so long ago he flew over South America and suddenly noticed in the airplane’s porthole a trinity of mysterious shining balls that struck him to the depths of his soul. Strange clusters of light circled in the air, like living beings, sometimes lining up in a straight line, then again running in different directions.

One of the balls at some point flew down, and the other two soon followed him. After that, unidentified flying objects disappeared from the eye of the witness, and he sighed with relief, because he had already begun to fear that the safety of the flight of the airliner threatened all of this.

Of course, the witness of the incredible picture did not fail to capture it on the camera of a mobile phone.

Many users say that this is one of the best evidence of the presence of aliens on Earth, who are constantly watching us.

Fortunately, such escorts do not bring the slightest harm and inconvenience to civilian airliners, but the most important thing remains unclear: why alien spacecraft are chasing earthly planes? Is it only to surprise or even frighten (as it was in this case) earthlings?

Exobots And Robonauts: The Next Step In The Search For Aliens