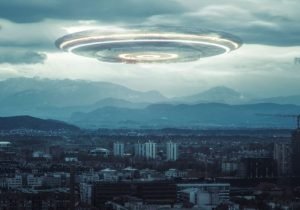 Dr. Wernher von Braun, the head of the Nazi rocket program, was brought to America after the war because our government considered his knowledge and expertise too vital to fall into enemy hands.

With access to NASA’s secret programs, von Braun apparently began to see the “big picture” regarding the true goals of America’s space program and how the military-industrial complex was manipulating it according to a secret, hidden agenda.

Dr. Carol Rosin was an industry executive when she first met Dr. Wernher von Braun in February 1974. At this time, before his death in 1977, von Braun confided to Dr. Rosin NASA’s hidden agenda.

Inviting her into his office, Von Braun stunned Dr. Rosin by explaining that it was all leading to planetary control under an oppressive One World Government.

According to Dr. Rosin, von Braun then gave her one supreme assignment:

“He said a secretive trans-national power, already in existence, would move to permanently take control of this planet thru a hoaxed alien invasion from outer space.”

According to von Braun, space based weapons, later known as the “Star Wars” program, were to be promoted as:

– a “shield” against the Russians
– then, as a defense against ‘rogue’ nations
– then, as protection against asteroids and meteors
– finally they would be presented as a safeguard against an extraterrestrial threat

According to von Braun, all of these rationales would be lies.

These space based weapons would be useless against nuclear suitcase bombs available even in 1974, as well as chemical, viral, bacterial and biological terror weapons.

More importantly, von Braun told Rosin that we already had the technology to build anti-gravity vehicles and entire transportation systems which did not require so-called ‘fossil’ fuels.

Instead, they used “beams” of energy, eliminating all pollution.

If space-based weapons technologies are not being developed to protect the U.S. and its allies, why are they being developed? Could resistors, whether nation-states or isolated groups opposed to the coming New World Order, be singled out and eliminated?

Another possibility is that such space-based weapons will be part of the “smoke and mirrors” light show designed for use in “Project Blue Beam” with its false, projected presentation of an alien invasion.

According to Dr. Steven Greer, the head of the “Disclosure Project,” “…the prospect that a shadowy, para-governmental and transnational entity exists that has kept UFO’s secret – and is planning a deception that will dwarf the events of 9/11…”

This is a scenario that more people within the depths of our government have begun to reveal.

“Since 1992 I have seen this script unveiled to me by at least a dozen well-placed insiders.

“Of course, initially I laughed, thinking this just too absurd and far-fetched… and yet others told me explicitly that things that looked like UFOs, but that are built and under the control of deeply secretive ´black´ projects, were being used to simulate — hoax — ET-appearing events, including some abductions and cattle mutilations, to sow the early seeds of cultural fear regarding life in outer space.

“And that at some point after global terrorism, events would unfold that would utilize the now-revealed Alien Reproduction Vehicles (ARVs, or reversed-engineered UFOs made by humans by studying actual ET craft) to hoax an attack on Earth.”

The goal of this hoaxed space alien invasion was simple: Create a common enemy and drive all nations to submit to a One World Government.

And in Dr. Greer’s words:

“…to justify eventually spending trillions on space weapons… thus uniting the world in fear, in militarism and war.”

Greer claims that Hollywood movies have been deliberately implanting a fear of ET’s:

“…this mental conditioning to fear ET has been subtly reinforced for decades, in preparation for future deceptions…The Plan is to eventually create a new, sustainable, off-planet enemy…”

The possibility of an “off planet” space fleet was given even more credence recently when a young Scottish hacker by the name of Gary McKinnon recently broke into the Pentagon’s computers and reputedly came up with,

– the names of some of our “off-world” U.S. space fleet (identified under the abbreviation: USSS)
– two specific space ships, (the USSS LeMay and the USSS Hillenkoetter)
– the names of the various crews, their ranks, and transfer assignments between various “off Earth” space ships

This computer security breach so enraged the brass at the Pentagon that the U.S. Government is currently seeking to extradite McKinnon from the U.K. to face charges of computer hacking with a punishment of LIFE IN PRISON!

Certainly this is one way to permanently silence an embarrassing discoverer of forbidden information.

Now that we know Illuminati plans, we can prepare for the greatest deception in human history by warning others, and deciding how we might deal with a hoaxed space-alien invasion scenario.