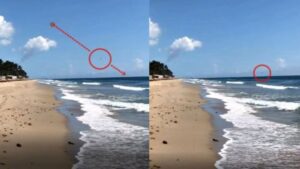 A video taken at Lantana Beach, Florida on 6/15/2020 shows an unknown object that pops out of the blue sky 1-2000 feet up and shoots down into the ocean without a splash in 1/4 of a second, reports ufosightingshotspot.blogspot.com.

At first glance, the witness thought that it was a kite, but after watching the video again, the object appears to be some sort of craft and it shot out of the sky with tremendous speed, it did not just fall, according the witness who was absolutely enamored by the video his girlfriend took at the exact second.

The question remains what the object could have been, maybe space junk, maybe a UFO as it is known that there are UFOs (USOs) emerging from and diving into the oceans.

But what really stands out is that this object shoots down into the ocean without a splash, something that is impossible when an object plunges into the water at high speed.