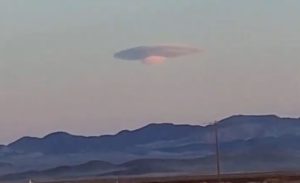 One resident of Nevada managed to capture a video of what he believes is a UFO – or at least a spaceship which is under a cloaking device.

The video shows a strange circular, low-lying cloud which resembles a classic flying saucer. While many have claimed this is just an odd cloud formation, some UFO experts believe it is an alien spaceship which is trying to keep a low profile.

UFO experts and conspiracy theorists believe that UFOs sometimes resemble clouds, as this way they can monitor the public without making them aware that they are being watched.

Another explanation is lenticular clouds. Lenticular clouds are stationary clouds that form mostly in the troposphere, typically in perpendicular alignment to the wind direction.

They are often comparable in appearance to a lens or saucer.