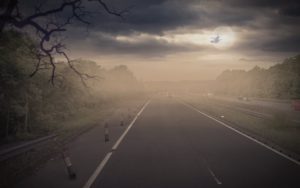 Perhaps Henrico County’s most famous spirits are the “ghost riders” who surfaced during the construction and early usage of the Pocahontas Parkway more than a decade ago. Newspapers and magazines from as far away as Australia reported on the strange phenomena, which first made headlines in the summer of 2002.

Initial reports centered around an incident in which a long-haul trucker saw a trio of Indian warriors wearing breech cloths, carrying torches and walking in the middle of the newly-opened parkway.

Assuming the Indians were staging a protest, the truck driver sounded a warning blast of his horn at two additional torch-bearers he saw in his headlights, and reported the incident at the toll plaza.

The toll-taker – knowing of similar eerie accounts from numerous motorists and construction workers – filed an official report. Among other stories making the rounds at the time was that of an engineer who was working nights to finish the parkway and reported that he and several construction workers spotted an Indian mounted on a horse at the bottom of the bridge.

The Indian appeared to be watching them from the interstate below – and just as they were about to shoo him off, telling him horseback riders aren’t allowed on the interstate, the man and his steed disappeared.

Other toll booth attendants described spirit pranksters who liked to bang on the back of the metal maintenance buildings. One toll-taker lost her appetite as she was about to break for a midnight meal, after seeing her can of soda moving from one place to another on the table.

Plaza workers also reported seeing ghostly figures running back and forth around the loading dock and hearing drumbeats mingled with chants, whoops and high-pitched howls emitted by dozens of voices.

Long-time residents who live on land adjoining the parkway were not surprised by the reports, having heard nighttime noises resembling drumbeats and chanting for decades.

Ron Hadad, owner of Hadad’s Lake, has lived less than a mile from the toll plaza for almost 50 years and recalls that his mother swore she heard “hooting and hollering” long before the expressway was ever built.

Although Hadad has never seen any ghosts, he mentions that the daughter of a local Indian chief once told him that there are an abundance of spirits in the area. Hadad suggests that he is not inclined to deny such spirits exist.

After all, he says, “I’ve seen the look on my mother’s face.”

A legend is born

In a pre-construction dig at the toll plaza site led by archaeologists from the College of William and Mary, excavators found Native American artifacts dating back 6,000 years, and historians have speculated that the area was inhabited as long ago as 3500 BC.

There’s little doubt that the parkway cuts through the site of ancient Indian villages, and that the toll plaza in particular rests on Indian burial grounds.

So surely, Native Americans had reason to be upset about a modern expressway plowing through their old hunting and fishing grounds and ancient resting place. Yet spokespersons for the tribes in the area insisted that no anti-parkway campaign or protests were ever organized – at least by living natives.

Chris Dovi, a reporter who covered the 2002 incidents for the Richmond Times-Dispatch, recalls that he interviewed state troopers and multiple toll workers and examined numerous incident reports about vague outlines of Indian figures darting back and forth around – and sometimes even through – the plaza buildings. Indians on horseback also were said to have ridden right through passing cars and trucks as they crossed the roadway.

Descriptions of the images seen around the toll plaza varied, Dovi says, but most described the figures as “a legless, [fully-formed] torso with an indistinct head.”

Although troopers responded to dozens of calls, the only one who saw anything was an officer who followed up on reports of a spectral image behind the toll plaza office building – which allegedly showed up in security camera footage.

“So they called the trooper,” recalls Dovi, “and [the image] was still outside. The trooper freaked out.”

Virginia State police spokeswoman Corinne Geller also visited the plaza and told Dovi that she was unnerved by the howls and wails she heard, which could not easily be explained away.

“I talked Corinne into going out there with me one night,” Dovi says, noting that they spent the hours from midnight to 3 or 4 a.m. on the scene.

“We heard drums and whooping pretty frequently – intermittent and off in the distance,” says Dovi, who is now affiliated with Richmond Magazine and radio station WRIR. “If I had to speculate on what it was, I’d say geese. But there was no body of water [near the sound], and when Corinne and I walked over, it would stop.

“We spent a good part of the evening wandering around – and whenever we would leave an area, we’d hear it again.”

Once the story broke about the “Pocahaunted” Parkway, as it had now been dubbed, amateur ghost-hunters swarmed to the parkway at night. Parking illegally on the roadside and overpasses, thrill-seekers brought coolers and lounged on picnic blankets, hoping to hear drumbeats or catch a glimpse of the ghostly apparitions.

So many visitors began parking illegally and trespassing on nearby private property, in fact, that state and county police had to work overtime to control the crowds, and the newspaper published another story warning of the dangers.

Professional ghost-hunters and paranormal investigators also descended on the area, recalls Hadad. “They lined up on 895 for a mile just waiting for something,” he says, “with all their machines.”

One paranormal investigator who knew a little of the Algonquian tongue attempted to communicate with the spirits in their ancient language.

As he later reported on his website, “The first few words had barely left my mouth when I heard a popping, hissing sound and was startled to see what appeared to be a bolt of horizontal lightning slowly coming toward me, at a height of about six feet above the ground. It hit the mound in front of me and a giant crack
opened up.”

Out of the crack, wrote the investigator, appeared the faces of foxes, coyotes, and beaver – bringing to mind the old Indian legend that spirits return in animal form. “The most outstanding of all,” he said, “was the Spirit of the Great White Wolf, who supposedly watches over all that are buried there.”

But Indian sightings and disembodied chants were not the only eerie occurrences to have taken place around the parkway and toll plaza. Less well-publicized are the spirits who apparently drove cars, and were encountered by more than one toll worker and trooper, according to Dovi.

“I talked to a bunch of the plaza ladies, [who said] they would hear a car coming, and would sense a car,” Dovi recalls. “The car would pass through the toll booth and would even displace air – but there would be no car.”

One night, a trooper was standing near the toll plaza and sensed, but never saw, an approaching car as well.

“He jumped out of the road,” said Dovi. “He was afraid he would get hit.”

Ron Hadad can tell tales of ghost cars as well – although the events took place decades ago, when he was a young adult living in the pool house on his parents’ property.

Occasionally, late at night, Hadad and his dog, Zeus, would wake to the sound of a car on gravel outside the window. Hearing a car park next to his room, and hearing footsteps approaching on the gravel, Hadad would get up and go to the window to see who was there. Every time, he found nothing.

“Naturally you’re going to try and look at it from the logical point of view,” says Hadad, who did his best to try and explain the sounds away. “I’ve been around long enough to know that sound carries, especially at night; and back then – before they built [the parkway] – you could hear I-95.”

But his home was in the middle of the woods, he says – and his dog was hearing the sounds too. “Zeus was a smart dog,” says Hadad. “So if I was going crazy, my dog was too.

“I can’t explain it. The hair on the back of my neck is standing up as I talk about it.”

Although it’s been years since Hadad’s late-night experiences, and reports of the Pocahontas Parkway ghosts have died down in the intervening decade, there can be no denying that some unusual events surrounded the opening of the road.

For some time, rumors ran rampant that the Virginia Department of Transportation had videotaped proof of the hauntings, including images of an Indian on a horse walking through the toll plaza, but that the tape had been “lost” and the story covered up. On the other hand, skeptics raised suspicion that the whole thing was a publicity stunt, designed to attract more motorists to the pricey and under-used new toll road.

Whatever the source of the noise and the sightings, however, there’s no doubt that the occurrences earned the Pocahontas Parkway, at least fleetingly, a measure of international fame.

And many are the believers who agree that it has earned, as well, the title bestowed by one curiosity-seeker: “perhaps the most haunted toll road in the U.S. – even the world.”