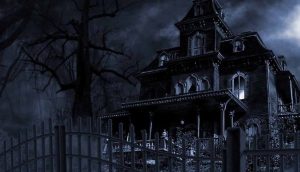 The bootlegger’s case was investigated by members of the American Society for Psychical Research. More than one ghost haunted the Pennsylvania residence.

The location of the house and names of those involved have not been released by the American Society for Psychical Research, ASPR. The place is referred to as a Pennsylvania Mill Town. The house was built by a Yugoslavian immigrant in the 1920s.

He made moonshine and began to drink heavily and left his family in 1927. His wife kept bootlegging and turned their home into a boarding house during the Depression. He returned and tried to sell the house without his wife’s knowledge, but was caught and had to sign it over to her.

Two subsequent owners experienced nothing. In 1956, when the third owners began remodeling the house, the ghostly phenomena began.

There were nine people in the family who moved into the house in 1956. I’m using pseudonyms for the family who wants to remain anonymous for clarification and brevity. These are Mr. and Mrs. Francis and Ann Jones, children Mary, Brad, Michael, Kim, Lee, Glenn and Sandy.

Every family member witnessed the ghostly activity. There were cold spots and apparitions, ranging from misty shadowy beings to solid human ones. They heard bangings, rappings, footsteps, doors opening and closing and footsteps. Sometimes, objects moved by themselves. Four family members felt something grab them.

Usually, they saw a male figure; occasionally, a female. The ghosts stood, sat in chairs or rushed by the family. Francis saw an apparition six times. He thought it was a male, but its face was turned away from him. He heard a voice tell him to leave the house.

The two oldest girls, Mary and Kim went upstairs and saw a tall, skinny dark-eyed man. They thought he was a burglar. Mary felt a presence in the basement and walked up the stairs. She felt something grab the back of her sweater.

Ann and Brad said they walked through an apparition. Lee woke and saw a man and woman in the bedroom she and her brother shared. She ran to tell Mary who scolded the ghosts. They heard footsteps. Brad woke and saw a tall man bending over his bed. Francis and one of his daughters were fixing a screen door in the cellar and saw a male ghost.

In 1978, the Joneses contacted the ASPR. The late Dr. Karlis Osis and Donna McCormick documented the investigation. Dr. Osis was renowned and respected for his work in survival theory – a part of the human survives death of the physical body and out of body experiences.

Usually ghosts and poltergeists don’t cooperate with parapsychologists and lay low during investigations. Dr. Osis saw a shadowy human form and another investigator saw a wisp of smoke.

The ASPR brought two psychics into the investigation. The first one said a couple who died young haunted the house. She died in the home; he, during World War II. Historical facts didn’t validate this.

The second psychic said the male haunter was the one who had built the house. He was a bootlegger and complained his wife swindled hum out of their home. He loved the house and hated the remodeling, so he tried to scare the owners out.

She had been told nothing about the history of the house or the phenomena. The psychic tried to release the bootlegger’s apparition and was successful in ending the phenomena.