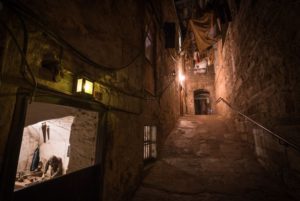 Like most streets of the time“the Close” had buildings several stories high that closely hemmed it in. In the 1600’s it was common practice to throw human waste out the windows onto the street below–so the upper and middle classes lived on the top tiers away from this filth while the poor lived on the street level.

Alexander King who was an advocate to Mary Queen of Scots named this Close after his daughter Mary. He owned several properties in the Close. Mary had a stall on the street where she sold lace.

When the bubonic plague hit in 1645 this street was ravaged. Families that had a sick person in their homes had an “X” chalked on their door. Food was dropped off on their doorstep. No contact was allowed for six weeks–except for the plague doctor– until the ill person either died or recovered. When possible the ill were moved to a plague hospital.

When many of these victim’s bodies were burned to prevent the spread of the disease it is said that their ashes were mixed with horsehair and dirt and then was used to construct ceilings in the Close.

Many years after this outbreak when no one lived in Mary King’s Close it was walled up and closed for the next 100 years. But the street had so many dark mysteries connected to it that a myth started to circulate that the Close had actually been walled up during the plague outbreak and that many people who were ill were closed within its walls. To the chagrin of many this myth still persists today.

Because this street was walled up it is well preserved. The visitor today–250 years later– can still see the original buildings and layout.

Mary King’s Close most famous ghost is that of a little girl nicknamed, Annie. In 1992 a Japanese psychic was startled when she entered a small room in the Close. She immediately felt sickness, hunger and a bitter cold envelop the room. She then felt the presence latch onto her leg.

Others have received the message that Annie is sad because she lost her favorite toy. So countless visitors have left Annie gifts in the small room that is now named after her.

Most believe that Annie’s family probably left her behind when she became ill with the plague.

Other activity in the Close includes phantom footsteps walking up and down the empty street and visitors and guides have seen a ghost of a lady wearing a black or grey dress. The ghost of Mary–Alexander King’s daughter is seen.

Witnesses have also reported seeing masculine figures in the Close that just disappear when approached. In fact, some of these sighting were reported back before the street was walled up.

In one particular chimney strange noises are heard. When people have put their hands inside they are sometimes scratched.

In 2008, a photo taken by accident is now considered solid proof that the Close is haunted.

Late one Saturday night, the general manager, Stephen Spencer was checking an infrared camera installed to take pictures of tour groups as souvenirs.

As Spencer stood in the street he snapped several photos, he then returned to his office to turn the computer system off. He looked at the photos he had taken and realized that one of them had captured an interesting image. 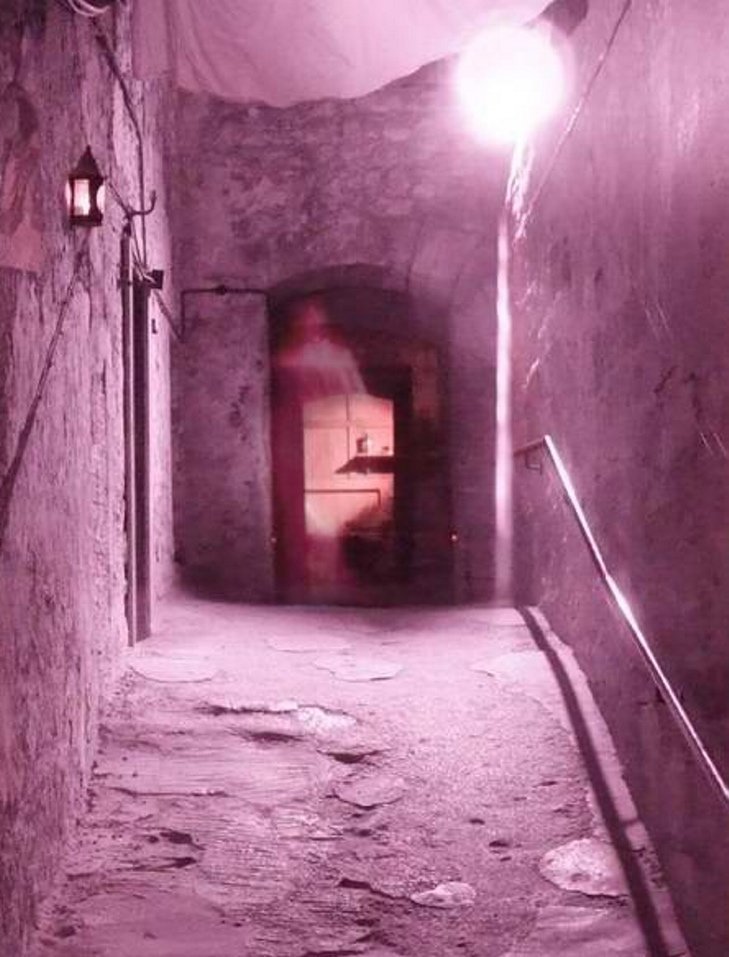 A translucent rotund figure was standing in the background–the street was closed for the night and Spencer was the only one there when he took the photo. Since, several reliable ghost investigators have examined this photo and they all conclude it is very compelling.

What is even more interesting is many visitors over the years have described seeing this rotund ghost in the same area.

Some speculate this ghost is Major Thomas Weir, who was known as The Wizard of West Bow . He was strangled and then burnt at the stake in 1670 after publicly confessing to witchcraft, Satanism and incest.

Yet others think this ghost is Andrew Chesney, a saw-maker who lived in Mary King’s Close and operated his business in 1892. He is believed to be the last person who lived in the Close.His workshop is highlighted in one of the tours given.