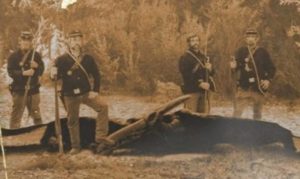 Reports of Big Birds, that scientists say do not exist, are actually somewhat common. The Big Birds have been seen over a wide area of the continental U.S. stretching from Pennsylvania through Illinois, Iowa and into the American South West. Alaska has also had sightings of the Big Birds as reported in the “Anchorage Daily News” on October 15, 2002.

The Alaska sightings began when a pilot and passenger spotted A Big Bird while flying in a Cessna 207 on their way to Manokotak. They estimated the creatures wingspan at approximately 14 feet. On October 10th a 43-year-old man named Moses Coupchiak saw one of the Alaska Big Birds while working on his tractor.

Coupchiak said the raptor looking bird was about as large as an old “otter plane.” He watched it for some time before it disappeared behind a large hill.

Pilot John Bouker and a passenger saw what at first appeared to be a small plane at about 1000 ft away. As it came closer it was clear that it was not a plane at all but a gigantic bird. Bouker said “He’s huge, he’s huge, he’s really, really big. You wouldn’t want to have your children out.” The passenger in Bouker’s plane said the creature’s wingspan was about half the wingspan of a Piper Super Cub, approximately 18 feet.

There are no known birds of the size reported or as one scientist put it, “there haven’t been birds of that size for over 100,000 years.”

So what did the Alaska Big Bird witnesses see? Some suggest the creature may have been a Stoller Eagle, a very large bird about 50% larger than the Bald Eagle but nowhere near the size described by witnesses.

Chupacabra: The Whole Truth About The Most Horrible Creature