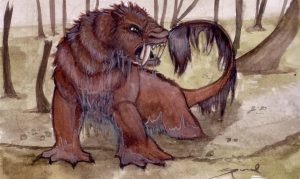 Puppeteer Lee Dexter created lovable Bertie, star of a popular children’s show based on the bunyip which has been sighted in Tasmania and other places. What could it be?

In 1953, Bertie and friends made their debut on Philadelphia television’s Channel 3, then WPTZ. It was a time when people were dimly aware of cryptids Yeti and Nessie, the Loch Ness Monster.

It was an era when the paranormal was talked about in whispers. The bunyip was said to be a myth which people put into the same category as unicorns and dragons. Bunyips have been sighted, but none have been captured or killed.

The Bertie the Bunyip Show

Bertie wore a polka-dot tie, had kangaroo ears and a round red nose that rested on top of his snout that resembled a platypus’ bill. He and his friends lived the storybook town of Bunyipville.

There were Poochie the Pup, Tiger Tommy, Fiffi the French Poodle, busybody Nixie the Pixie, Cindy the Dog, Winnie the Witch with her broom and white rabbit Humphrey Carrotfoot who wore a black cape.

Dexter’s Explanation of a Bunyip’s Appearance

The creatures are odd-looking because they were at the end of the line when God created animals. They got leftovers from other ones, the platypus’s bill, kangaroo’s ears, scraggly puppy’s fur and a bubble-like nose.

The Australian puppeteer, born in Melbourne, created Bertie from leftover parts of other puppets. Although in some Aboriginal legends, a bunyip is a water monster believed to carry diseases, Dexter said it was an Aborigine good spirit.

There have been many reports of bunyip sightings over the years, some documented sightings dating back to the mid-1800s.

1852 – The first recorded encounter by a white man was when Joseph Barwick was duck hunting in Lake Tiberias on a moonlit night. He saw a large animal that was watching him and felt uneasy. He shot and wounded it, but the beast had disappeared, leaving some shiny hairs behind. Barwick said the animal resembled a large seal.

1863 – Charles Hedlam and his son were in a rowboat on Great Lake when an oar hit something solid. It was an animal about a sheepdog’s size with what looked like small wings or flippers that swam away from them, keeping its head above water, at a speed of thirty miles per hour.

1870 – Constable McFarland’s son saw large unknown water animals on Swan Bay’s shores. They were over three feet long, dark colored and had round heads. Mr. Howe and seven friends saw an animal about four or five feet long swim to the rushes on the shore of Lake Tiberias.

1902 – A government official and his companions saw the cryptid in Lake Tiberias. It looked like a dog/wombat mix and emitted cries.

1906 – William Johns saw a platypus rushing from Great Lake to its rocky shore. A mysterious animal, at least three feet long, was pursuing it. They both disappeared among the rocks.

1908 – Mr. H. H. Scott, curator of the Launceston Museum received report of a large swine-like animal in the area of Lake Tiberias.

1914 – Reg Slater, his two sons and Mr. Gale sighted a dark brown animal that was about five or six feet long and had a black fin about a foot and a half long behind its head in Great Lake.

What are Cryptid Bunyips?

Some theorize that bunyips are seals who found their way to interior lakes eons ago and adapted to the freshwater environment. They say that the evidence for this theory is that people who have never seen a seal, when shown pictures, identify them as bunyips.

In 1989, bones of a six foot long saltwater crocodile were found buried in Tasmania’s Central Highlands which led to the theory that bunyips are crocodilians.

It’s possible that pet crocodiles were set free or escaped from captivity. Some scientists postulate that bunyips are water-dwelling dinosaurs believed to be extinct.

If this is true and one is captured or killed, they would be living fossils like the tuatara and the coelacanth.