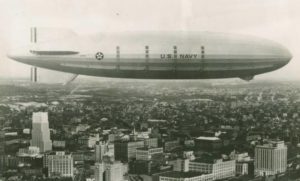 The airship, USS Akron, was built for the United States Navy by the Goodyear tire and rubber company, at the time it was the largest blimp ever built in the United States. The Navy began flying the Akron in 1931, mostly around Lake Erie and the upper Midwest. On October 10, 1931, the Akron was scheduled to fly from Detroit to Huntington, West Virginia. What happened that day remains unexplained.

In an age of radio and newspapers, people along the flight path of the USS Akron waited with anticipation just to get a brief glimpse of the mighty airship. The residents of Gallipolis, Ohio, were no exception. They scanned the sky for the Akron, then they saw it. The Akron was approaching, it had already been seen by witnesses in Point Pleasant, just across the Ohio River.

Then, to everyone’s shock, the USS Akron exploded and crashed into the rugged West Virginia terrain. Witnesses said it appeared that 3 people managed to parachute to safety. An extensive search found nothing and it was soon revealed that whatever observers on the ground had seen, it was not the USS Akron. The airship was still in Detroit, the Navy had canceled the flight due to bad weather along its flight path.

Less than 2 years later, in the early morning hours of April 4th, 1933, the USS Akron was flying off the coast of New Jersey when it encountered a sudden and powerful storm The Captain ordered full speed ahead but the Akron could not out run the storm. The airship exploded and crashed into the Atlantic. Of the 76 men on board only 3 survived.

The USS Akron, as it turns out, was not the first blimp built by Goodyear to carry the name Akron. In 1911, the company built a blimp that was to be used in an attempt to cross the Atlantic Ocean. The first try failed and on the second attempt disaster struck. While off the coast of New Jersey the old Akron exploded and crashed into the sea, very near the location that the USS Akron would meet its end about 20 years later.

Are We All Slaves To Unconscious Forces?