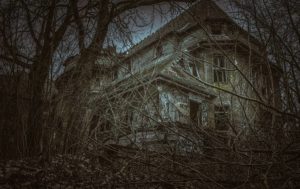 Most people in Marion County, Ohio have heard the legend of The Mongoloid House, which is situated on Salem Road, and is not to be confused with Salem house, which is on the same road but a different house. Today, the house is abandoned and there is graffiti on the walls saying “Leave while you can!” and “This is hell!” According to the legend, the house was the site of a number of gruesome murders and it is now said to be haunted.

The story goes that the first occupants of the house were a Civil War veteran and his wife. The couple were unfortunately unable to have children, and when the wife suddenly got pregnant, her husband immediately became suspicious. She ended up giving birth to two children, a boy and a girl. However, the children were both hideously deformed.

The husband refused to believe that the children were his and became convinced that his wife had been cheating on him. One terrible night, the couple had a fight and the man flew into a rage. He killed his wife with a shotgun, then set the house on fire and hung himself from the rafters.

Somehow, the children escaped from the blaze and they continued to live in the burned-out shell of a house, surrounded by the burned remains of their parents. As the years passed, the children grew up and had children of their own. With each successive generation, the children that were born became more and more deformed.

They say that, back in the 1960′s, the family who lived on the property were a peculiar looking bunch, with hunched backs, high foreheads, big heads, stocky builds and close set eyes. Some people claimed that the family were all mentally challenged or handicapped.

Teenagers would often drive by the house and antagonise the family by honking their horns or harassing them by shining flashlights on the house. The people in the house would come running out and throw rocks at cars and beat on them with baseball bats.

The crazed family would often be seen hanging from trees like monkeys or jumping out of ditches at passers-by. Some say they would fire shotguns into the air as a warning or even shoot at the cars. Others claimed they had paths through the fields and would use them to cut through and come out in front of your car, blocking you. If you got out of your car they would chase you down and kill you.

Today, The Mongoloid House is abandoned and nobody knows what happened to the family that once resided there.

The house is also said to be haunted, and if you go into the basement of the house for anything between two to five minutes, you start to feel invisible hands touching you. In the barn, doors slam, screams can be heard, and there is an odd smell of sulphur.

People have also claimed to have seen a ghostly family approaching their vehicle near the house. At least one group of people recorded an EVP of a man’s voice in the barn stating, “You shouldn’t be here.” Batteries have quickly drained in the electronic equipment of other groups investigating the home.

Another legend about the home states that if your name is written on the wall of the house, your vehicle will break down before turning off the road.