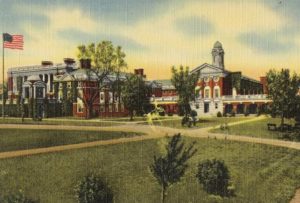 At the Blue Ridge Mountains of Virginia you will find Sweet Briar College. The school was founded in 1901 as an all Girls school, as it remains still today. It is a center of learning in an other wise rural landscape.

The school would not have been possible at all if not for its founder Mrs. Indiana Fletcher Williams. At the time of her death she owned a large plantation and great wealth, in her will she declared that all of her land and assets be used to fond a School for girls.

She left over 8,000 acres of land and 1 million dollars to achieve this goal, she gave literally everything that she had. She did this in honor of her late daughter, Daisy Williams, who tragically died at the age of 16.

Daisy was moved from where she was died in New York and buried in 1884 in the family plot. Her mother, and the founder of the college, is also buried there. The Williams family burial plot lies of the grounds of the college.

So here that story should end, but it doesn’t. Daisy’s spirit, perhaps restless after an early demise, remains still today at Sweet Briar College. One reason could be involving her monument at the family graveyard.

It is said that at the time of the Indie’s , as she is nicknamed, death the family realized her plans to give all of her wealth in honor of her daughter. It was too much for one relatives and in a rage they ripped out a stake from the wrought iron fence and smashed the small marble monument of Daisy’s gravestone to pieces.

According to the professor that mysterious cloud seemed to be dancing. Just as Daisy had done in her youth, as a childhood friend of Daisy’s wrote in her journals. In 1931 Mrs. Elizabeth Robertson Lee Wrote: “We could dance and pirouette in front of the tall mirrors in the parlors because we could see our reflections multiplied so many times.”

Another story is the account of Ann Marshall Whitley. The campus had been searching for a picture of Indie, the founder, for many years. Finally, Mrs. Whitley found proof that a newly discovered photograph was indeed that of the founder.

Sensing her college’s presence behind here she excitedly said “Do you know who we have here? It is the founder, it is Miss Andie. We have found Miss Andie.” She heard a low laugh behind her left shoulder. She turned to her college but she was not there. The room was empty. Perhaps it was Indy or Daisy amused and the discovery.

Also the sudden appearance of a large bronze medallion of the head and bust of Daisy Williams. In the W’s a new gymnasium was build and named the Daisy Williams Gymnasium. On the morning of the announcement, the college housekeeper went to her supply storage area as usual.

This time though a surprise was waiting. An old framed velvet mounted sixteen-inch diameter medallion bearing Daisy Williams. It had never been there before and an investigation never found any plausible explanation for its appearance. It now rests in the gymnasium.

These are but a few of the many stories involving the Spirits of Sweet Briar College. If you are in the area take a tour and maybe you will come face to face with the childlike spirit of Daisy Williams or the motherly spirit of her mother Indy.