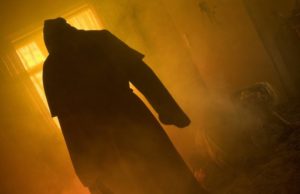 In 1966, the Pritchard family lived in a home located at number 30 East drive in Pontefract, East Yorkshire, U.K. There was nothing odd about or going on in the house until August. Three of the family members, Parents Jean and Joe and daughter Diane, age 12, were on vacation. At the Pritchard residence remained son Philip and grandmother Sarah Scholes. The first indication of ghostly activity came when Sarah felt a distinct gust of cold air while sitting in the home. It seemed so strange as it was a warm summer day, but it was only the beginning.

Moments later, Philip entered the room where Sarah was and noticed a white powdery substance in the air which soon began to collect on the floor. Sarah was already getting an uneasy feeling and went to get her daughter Maria who lived across the street.

Maria saw the powder on the floor but could offer no idea as to what it was and went to the kitchen to get a cloth to clean it up. As she entered the kitchen she noticed that a puddle of water had formed in the middle of the floor. She checked for any leaks from the plumbing but found nothing. Soon more puddles began to form and Maria turned off the water to the kitchen and called the water board. A few hours later an inspector arrived but could find no cause for the mysterious puddles and soon they just seemed to disappear.

Later that same day at about 7:00 pm, Philip entered the kitchen to find dry tea leaves and sugar was scattered over the counter top. As Sara responded to his call a cabinet door began to vibrate. Without thinking Philip grabbed the door and the vibrations instantly ceased.

Then the two heard a loud crash coming from the living room area. As they approached the stairs the stairway light came on and they saw that a plant, which had been at the bottom of the stairs, was now sitting about halfway up and it’s pot was sitting at the top of the stairs. Sarah again called her daughter to the house and all three witnessed the continuing activity in the kitchen. Cabinet doors were shaking, dishes were rattling and the puddles of water on the floor had returned. The three left the house for the night.

When the other family members returned from vacation all paranormal activity had ceased. Two years passed quietly and the strange phenomena appeared to have been a bizarre isolated event. Then it all began again, witnessed by all family members and visitors to the house. Daughter Diane seemed to be the focus of the increasingly violent phantom, being thrown from her bed on several occasions. The Pritchard Haunting continued on for several years during which time two exorcisms were performed. The results however did not bring about the desired results, in fact, things became worse.

At this point no one in the Pritchard house had seen any type of ghostly figure that could have been responsible for the paranormal events. That changed one night when Jean and Joe were woke by a figure in their bedroom which they described as “a black monk.” Over the next couple of weeks the black monk would be seen by all of the family members, both inside and outside of the home. Soon after the appearance of the black monk apparition all paranormal activity suddenly stopped and appeared to be gone for good as many years passed.

In 2012, a neighbor that lived next door saw Philip picking up some trash in the front yard and went over to ask him about the new renters that now lived in the Pritchard home. She was concerned because every night for the past week or so she heard very loud noises coming from the house, so loud that it was keeping her up at night. Phillip then informed her that they had not been able to find a tenant for the house, it was empty. Perhaps the black monk never went away after all..