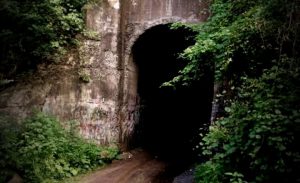 For any enthusiast of the paranormal the truly frustrating part of it all is that even though a location may be legitimately haunted you really at best have a one in twenty chance of experiencing actual phenomenon.

This small stone underpass in Niagara Falls Ontario then is something truly unique, as it has a specific way to call the entity out. Those brave enough to will hear the screams of a young girl being burnt alive. Welcome to the Screaming Tunnel…

Local legend tells that the tunnel is haunted by the tormented spirit of a young girl who was discovered and burnt alive after taking shelter from her attackers in the underpass. Some versions of this lore tell that the attacker was her father, others that it was neighborhood bullies, and another still tells that she was raped and then burnt alive by a drifter.

Walking through the tunnel day or night is perfectly safe and in fact, it’s not all that different from any other underpass. The entity here is not a malicious one and it has no interest in those just walk through, but light a match and the scene will change drastically.

For over a century those that lit a match while in the tunnel would immediately feel the presence of something with them, and “feel” – as in physical touch.

In many cases the match is immediately blown out, but those that are persistent and manage to keep a match lit will suddenly hear an exceptionally loud scream. Each person experiences this scream different from one another but they all describe the sound of agony that it carries.

Here’s where it gets really interesting, in 1992 a team of researchers visited the tunnel to capture the sound by recording on many levels including EVP and video. They lit the match and all experienced the phenomenon described above, from the first through fourth matches going out, to the scream on the fifth.

They also reported feeling the physical presence of somebody walking through their group. Despite all of that, the video and all of the recording equipment showed absolutely nothing. Whatever it is that happens inside the Screaming Tunnel it happens specifically to the people experiencing it and is not audible or visible to recording devices or people outside of the tunnel.

This all could make for a great debate into mass psychosis as thousands of people over a hundred years have experienced this phenomenon and many at the same time, but to anybody who is not in the tunnel when the match is lit it simply doesn’t exist.