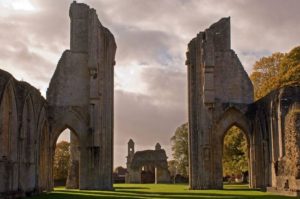 The Glastonbury abbey is said to have been founded by St. Patrick in the 400s. St. David, the patron saint of Wales was also at Glastonbury. The abbey was bigger than Canterbury and Westminster. Different churches were built on the land.

The last one was erected in the 1200s or 1300s. Henry VIII had it destroyed when he shut down the abbeys and monasteries in the 1500s after his split from the Catholic Church. The Earl of Somerset’s troops leveled the buildings, burned the library and smashed statues.

Arthur and Guinevere are said to be buried on the grounds. In the 1100s, monks found thee remains of a man with an inscription indicating it was the grave of Arthur in the Isle of Avalon.

The bones were reburied in a black marble tomb in the 1200s and destroyed when Henry VIII did so to the abbey. It is believed that the abbey was on the Island of Avalon and there is physical evidence that supports the possibility that the land had once been an island.

Frederick Bligh Bond, the great grandnephew of Captain Bligh of Mutiny on the Bounty fame, was fascinated by church architecture and the Middle Ages. Glastonbury held an even greater fascination for him. Bond joined the Somerset Archaeological and Natural History Society. When the society arranged to have the Glastonbury excavations done, he offered his services.

Bond was interested in the use of psychic talents in archaeology and the excavations. Once he was in charge of the excavations for the abbey, he contacted a retired Navy Captain, John Allen Bartlett, “John Alleyne,” to help. The man was an automatic writer. Bond believed his presence was necessary for the psychic process to be successful.

Their first attempt was successful. They received communications from the Watchers, who claimed to be spirits of monks who had lived at Glastonbury. They spoke with different voices. The spokesman for the monks called himself Johannes Bryant.

He said he lived from 1497 to 1533. He spoke in a mix of English and Latin. Bond was fearful lest they be accused of fraud and had independent witnesses at future sittings. They confirmed that Bartlett wrote at too fast a pace to be making up the information.

They received two drawings and information about the Edgar Chapel. The chapel’s existence was not known to them as a fact then. After the chapel, named after the English Saint, Edgar, they discovered that a few written references still existed.

There was also the Loretto Chapel, built in Italian style that was lost. The Watchers described its location so Bond was able to find it. More information was to come later. Bond gathered credible, logical information from the Watchers. 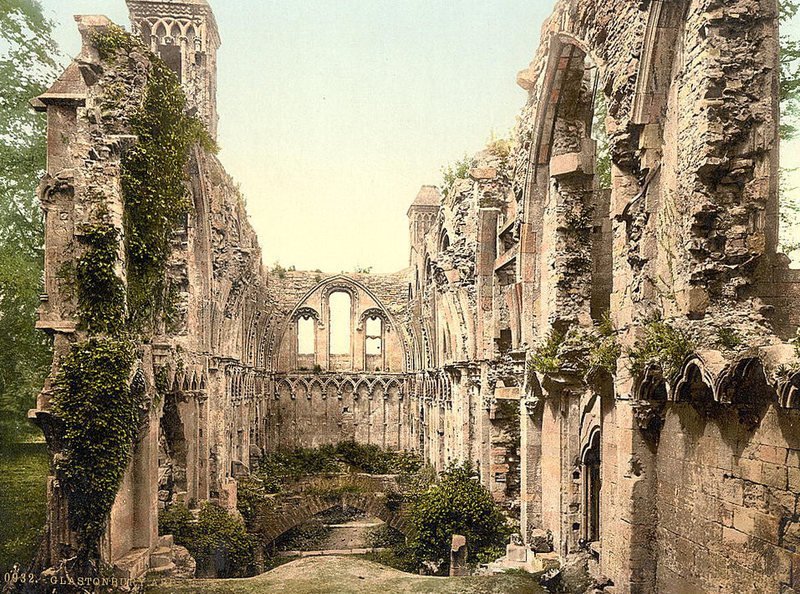 Through communication with the Watchers, Bond was able to identify various parts of the abbey including the monks’ hospital, herb gardens, washrooms, dormitories and some small cloisters, which were not on historical plans.

There was another monk, Abbot Beere who also provided information. He was one of the last builders who designed the construction of the abbey. According to him, the building was based on both sacred geometry and numbers. He went to Italy to record the precise measurements of the Loretto Chapel so it could be duplicated.

Because of the accuracy and speed of his work, Bond was made the Diocesan architect. It was not a paying job, but a hobby. He earned his money from his architectural practice, giving lectures and writing books. He kept the Watchers out of reports he made to the archaeological society, but hinted at their communication in a report in 1915.

In 1918, he published The Gate of Remembrance and wrote about the Watchers.

Bond did not believe that the monks were entities. He believed that there was a cosmic reservoir of human experience and memory that could be tapped by those who were sensitive, which is in alignment with Carl Jung’s theory of the collective unconscious.

Bond, after the publication of his book, was gradually eased out of his work at Glastonbury. Many believe that it was solely because of his psychic work. William, his biographer, Kenawell wrote that this was an excuse as opposed to a cause.

Bond had married in 1894. He and his wife, Mary, were not happy. She wanted a divorce, but he refused to grant one. Mary spread malicious rumors, slandering him. Bond was vain and arrogant and exaggerated the importance of positions he held. He refused to follow systematic excavation plans set forth by professionals.

The major churchman responsible for Glastonbury was Joseph Robinson, the Dean of Wells who strongly opposed Bond’s appointment as Diocese architect. Robinson was furious with the book Bond wrote and said his work was unscientific. He accused Bond of spiritualism, a sacrilege to the orthodox church, and of using Glastonbury as an experiment.

Bond refused to deny his claims of the Watchers’ information and was backed by prominent psychical researchers including Harry Price and Sir Arthur Conan Doyle. The church greatly cut back its funding. The archaeological society had a co-director, Sebastian Evans, watch Bond.

Bond refused to work with Evans in 1921 which is what led to his termination. The excavations were halted, which was to last for six years. Bond maintained that some of the discoveries, particularly the apse of the Edgar Chapel had been changed to refute Johannes’ claims that the chapel had sacred geometry.

Bond moved to America where he retired from archaeology and architecture and became a paranormal investigator. He returned to the UK and lived in Dolgelly, Wales. He always kept his love of Glastonbury.

Even now, his books are banned in the Glastonbury bookstore.

The Devil’s Tramping Ground: A Mysterious Place Where Nothing Grows