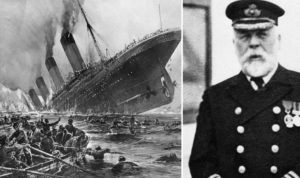 A mirror allegedly owned by Captain Edward John Smith is expected to cost more than $ 12,000. The historic keepsake was left at his home in Stoke – on – Trent, England, on the dressing table of the captain, when the ill – fated vessel embarked on its first Atlantic journey back in 1912.

It was subsequently taken by one of his servants-a maid named Ethelwynne-in the wages owed to her. However, according to a letter from her sister – in – law Hilda, the mirror had taken on something of a life of its own, and the image of the captain often appeared in the glass. ”

“She [Ethelwynne] always spooked me when she said that at times, she could still see Captain Smith’s face in it on the anniversary of when the Titanic was sunk,” Hilda wrote.

It was probably in this very mirror that Captain Edward John Smith saw his own noble, bearded face before leaving home to take the helmet of the Titanic, ” said the auctioneer Richard Winterton. ”

“Even with one’s feet firmly on land and in the sunshine of a clear afternoon, there is something otherworldly about seeing your own reflection in such an object.”