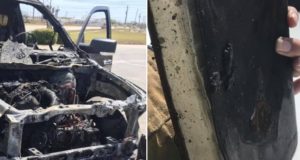 On March 8, in Deer Park, Texas, the car in which the Bible was located was completely burned out. The car belonged to a local woman, Trina Carr.

According to the American, she was riding her pickup truck, when she suddenly sensed something was amiss. After a moment, she saw smoke, so she decided to call the firemen right away.

The car caught fire, the engine compartment and interior were completely melted. However, as it turned out, some things survived: the Bible and the notebook.

Interestingly, the Bible lay on the dashboard, so it is amazing how it generally remained intact.

“This is nothing but divine intervention”, Trina believes.

The cover of the holy book was slightly damaged, but overall it turned out to be untouched by the flame. No one can explain how this happened.