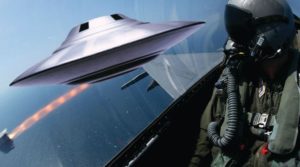 The vast majority of UFO reports are poor things evidentially. The largest proportion of sightings are referred to as nocturnal “lights in the sky” (LITS), usually mere points of light observed from a distant ground location.

But sometimes our nocturnal wanderers are not so easily identified. One of the most impressive UFO cases on record occurred on the nights of September 18 and 19, 1976, over Teheran, Iran. Because the UFO was intercepted by Iranian fighter jets, the incident has become known as the “Teheran Dogfight.”

Around 10:30 p.m. on September 18, Mehrabad Airport received phone calls about an unidentified object hovering at an altitude of 300 meters over the northern district of the Iranian capital.

The airport’s radar was not operating at the time, as it was under repair, so the air traffic supervisor that night, Hussain Perouzi, did not at first pay the reports much attention. After the fourth call in less than an hour, Perouzi did the obvious thing and tried to spot the UFO from the tower with a pair of binoculars. In short order he spied it:

“…It was rectangular in shape, probably seven to eight meters long and about two meters wide… it was probably cylindrical. The two ends were pulsating with a whitish blue color. Around the mid-section of the cylinder there was this small red light that kept going around in a circle…”

At 12:30 a.m. September 19, Perouzi notified the Imperial Iranian Air Force Command about the UFO. General Nader Yousefi ordered an F-4 Phantom jet scrambled from Shahrokhi AFB to check out the intruder. The F-4 did not take off until 1:30 in the morning. The pilot was vectored to a spot 75 kilometers north of Teheran.

The UFO was so brilliant he could see it from that distance. General Yousefi could also see the UFO from the balcony of his home, nineteen kilometers from the object’s position. To him it looked like “a big star among the other stars… it was at least twice as large as the normal stars.”

As the F-4 closed the range on the UFO to 46 kilometers, the pilot suddenly lost all his avionics and communication systems, both his external UHF radio and his internal intercom system (F-4s have a two-man crew, a pilot and a radar operator). He turned away from the UFO and beat it back to Shahrokhi. Once his nose was pointed for home, the jet’s electronics promptly came back online!

General Yousefi, now alarmed, ordered a second fighter scrambled. Flown by Lieutenant Jafari, the second F-4 was able to get a radar fix on the UFO. According to a once classified report filed by the American Defense Attache Office in Teheran, Lt. Jafari compared the UFO’s radar return to that of a Boeing 707 airliner.

The visual size of the object was impossible to judge due to its brightness. Jafari saw rapid color shifts of blue, green, red, and orange. He chased the UFO over the city, and once south of the capital, the UFO released a smaller object, very brightly lit, that flew directly at the F-4. Lt. Jafari armed his AIM-9 “Sidewinder” air-to-air missiles and prepared to fire on the closing smaller object.

At this harrowing moment his weapons control panel “went off” and his radio equipment ceased to function, just as had happened to the first F-4! Unarmed and deaf, the Iranian fighter pilot decided discretion was the better part of valor and dived sharply out the path of the oncoming object.

As the gap opened between the two aircraft, Jafari’s systems reverted to normal. The second object turned around and flew back to the main UFO, then a third object, like the second, detached from the UFO and flew to the ground. This maneuver was seen by General Yousefi himself, from his balcony.

Another UFO, or perhaps the same one, tailed Jafari’s jet back to its base. An airliner nearby experienced radio failure, even though no one on board saw any UFOs.

After dawn, the two-man crew of the F-4 went by helicopter to survey the area where the third object seemed to have landed. The terrain was a dry lake bed, but no traces of a landing were observed. As the chopper circled, however, they picked up a “beeper” signal on their radio, obviously some kind of homing beacon.

The chopper landed where the signal was strongest and found a small house. The Iranian Air Force men asked the inhabitants if they had noticed anything unusual the night before. The locals admitted they’d heard a “loud noise” and bright lights, but that was all. The source of the homing signal was apparently not discovered.

The Peacock Throne of the despotic Shah came tumbling down in the revolution of 1979, and many of the high ranking officers involved in the Teheran dogfight went into exile. General Yousefi and General Mahmoud Sabahat later told researchers that they were interviewed after the dogfight by American General John Secord, who was then head of the US Air Force’s mission in Iran.

All the pilots and air traffic controllers were also interviewed, and a Defense Intelligence Agency report was forwarded to Washington, describing the remarkable incident in detail. The DIA report summarized its conclusions as follows:

“An outstanding report. This case is a classic which meets all the criteria necessary for a valid study of the UFO phenomenon:

“A. The object was seen by multiple witnesses from different locations (i.e., Shemiram, Mehrabad, and the dry lake bed) and viewpoints (both airborne and from the ground.).

“B. The credibility of many witnesses was high (an Air Force General, qualified aircrews, and experienced radar operators).

“E. There were physiological effects on some crew members (i.e. loss of night vision due to the brightness of the object).

“F. An inordinate amount of maneuverability was displayed by the UFOs.”

So what did the Iranians encounter that night in 1976? While it is tantalizing to imagine an extraterrestrial craft was aloft over Teheran, there is no distinct evidence this was the case, merely the suggestion of advanced technology at work.

But was it non-human technology? Iran bordered the Soviet Union, and prior to the overthrow of the Shah, was a major client of the United States.

Subsequent events in other countries (for example the “abduction” case of Franck Fontaine in France, in 1979) suggest the possibility that UFO events are sometimes staged by military and intelligence groups to study the reactions and consequences of inexplicable events on civilian and military personnel.

Whatever was confounding the Iranian military that night, it wasn’t merely a LITS. Darkness is still an effective cover for all sorts of activity, and still an adequate guard to insure the endurance of a mystery.