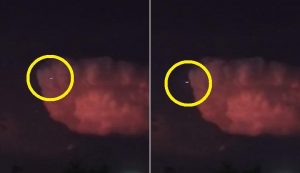 The video below was filmed at the end of last month by 53-year-old New Zealand tourist Darren Blakely. The traveler was on the Thai island of Phuket, where he suddenly witnessed a mysterious phenomenon.

Darren and many other eyewitnesses noticed a large, thunderstorm cloud of unusual red color relatively low above the ground.

Lightning flashed in a bizarre cloud, and it was interesting and scary at the same time. And then something happened that seemed to go beyond the realities of our world.

Suddenly, an unidentified object, resembling two brightly glowing globes, flew out of a cloud and moved away across the dark sky.

Many Internet users who watched the video decided that an alien ship flew out of the “wormhole”, hence this unusual kind of cloud.

According to other commentators, this anomaly was probably a pair of fireballs that could also make a thundercloud so fantastically bizarre.

NASA chief hopes UFOs are alien ships, not something else