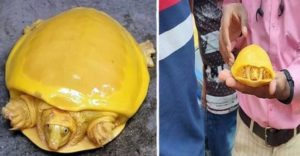 Many considered it a sign from above when yellow turtles were found in Nepal and India. Hindus are extremely mystical and believe that soon we should expect some important events, because literally in six months, several unusual turtles have already been found.

Many believe that this is a good omen. If we take into account Vishnuism and Hindu mythology, then it is in the form of a yellow turtle that the god Vishnu visits the Earth. It is worth noting that this god must protect the universe and now the time has come when his protection is needed as much as possible.

For example, it is believed that Vishnu can protect the world from the coronavirus pandemic, which can cause the destruction of not only Indians, but also people around the world. And if Vishnu so often began to appear in the form of turtles, then things are really very serious and in this case it is impossible to do without the intervention of higher forces.

In turn, experts who do not believe in mysticism and are engaged in the study and protection of local forests, talk about the fact that the unusual color of yellow turtles arose as a result of as yet unknown mutations.

The scientists added that the turtles, for some unknown reason, have become partially albinos. At the same time, the mutation occurred partially and the animals completely lost all pigments, except for yellow.

Those who have seen yellow turtles in reality state that they are not painted specifically for the photo. The animals are really completely yellow and do not even have a small speck of any other color.