Do you believe in Hell? If you do, what do you think where it is? Bible talks about Hell several times. Is it a real place or some symbolical meaning?

In Siberia a geological group drilled a hole about 14.4 kilometers deep in the crust of the earth and saying that they heard human screams. First they heard a high pitched sound, they thought the sound was from their digging devices. After some adjustments: They heard a terrifying screams…not just screams of a single human, but screams of millions human voice, a screams of pain.

Here is a statement of scientist named Dr. Azzacove from Russia who doesnt believe in God, in Bible and Hell. This news appeared in the well respected Finland newspaper, Ammenusastia:

“Screams have been heard from the condemned souls from earth’s deepest hole. Terrified scientists are afraid they have let loose the evil powers of hell up to the earth’s surface.

‘The information we are gathering is so surprising, that we are sincerely afraid of what we might find down there,’ stated Dr Azzacov, the manager of the project in remote Siberia.

‘The second surprise was the high temperature they discovered in the earth’s center. ‘The calculations indicate the given temperature was about 1,100 degrees Celsius, or over 2,000 degrees Fahrenheit,’ Azzacov pointed out. ‘This is far more then we expected. It seems almost like an inferno of fire is brutally going on in the center of the earth.

‘The last discovery was nevertheless the most shocking to our ears, so much so that the scientists are afraid to continue the project. We tried to listen to the earth’s movements at certain intervals with supersensitive microphones, which were let down through the hole.

What we heard turned those logically thinking scientists into a trembling ruins. It was a sometimes a weak, but high pitched sound which we thought to be coming from our own equipment,’ explained Dr Azzacov.”

‘But after some adjustments we comprehended that indeed the sound came from the earth’s interior. We could hardly believe our own ears. We heard a human voice, screaming in pain.

Even though one voice was discernible, we could hear thousands, perhaps millions, in the background, of suffering souls screaming. After this ghastly discovery, about half of the scientists quit because of fear. Hopefully, that which is down there will stay there,’ Dr Azzacov added.

‘What really unnerved the Soviets, apart from the voice recordings, was the appearance that same night of a fountainhead of luminous gas shooting up from the drill site, and out of the midst of this incandescent cloud pillar a brilliant being with bat wings revealed itself with the words (in Russian): ‘I have conquered,’ emblazoned against the dark Siberian sky.

‘The incident was absolutely unreal; the Soviets cried out in terror,’ says Mr. Nummedal. Later that night, he saw ambulance crews circulating in the community. A driver he knew told him that they had been told to sedate everybody with a medication known to erase short term memory. The Soviets use this drug in the treatment of shock victims.

“As a communist I don’t believe in heaven or the Bible but as a scientist I now believe in hell,” said Dr. Azzacove. “Needless to say we were shocked to make such a discovery. But we know what we saw and we know what we heard. And we are absolutely convinced that we drilled through the gates of Hell!”

Dr. Azzacove continued, “…the drill suddenly began to rotate wildly, indicating that we had reached a large empty pocket or cavern. Temperature sensors showed a dramatic increase in heat to 2,000 degrees Fahrenheit.”

“But when we made adjustments our worst suspicions were confirmed. The screams weren’t those of a single human, they were the screams of millions of humans!

According to an August 1989 article in ‘Science’ magazine, there is a Russian deep hole drilling project in Kola, near Murmansk, about 150 miles north of the Arctic Circle. Another German deep drilling experiment in north-east Bavaria has discovered warmer temperatures than were expected at certain drilling levels, although nothing even close to 2,000 degrees Fahrenheit. 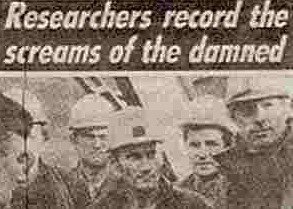 Do you know why Jacques Costeau, the famous underwater explorer, quit deep sea diving sometime before he died? It is said that he stopped because he had heard in one of the underwater caves he was exploring, the sounds of people screaming.

There was also another time, when one of his men, who was in a diving bell in the deepest trench at the Bermuda Triangle, also had a similar experience. He signaled to be brought up immediately. After being revived from his shock, he told others of his frightening experience of hearing “Screams of people in pain”.

Characteristic of many urban legends, this story was alleged to have occurred in an obscure part of the world where it would be virtually impossible to track down the facts. And once the story got started, people began quoting one another’s newsletters to validate their own. This is the stuff of which tabloid newspapers are made.