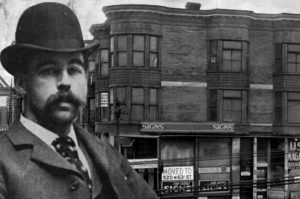 Doctor, pharmacist, Chicago gangster, con-man, hotel owner, and serial killer – Dr. Henry Howard Holmes is not only considered the first American serial killer, but quite possibly the only serial killer to build an entire hotel for the purposes of collecting female victims. Welcome to the Holmes Murder Castle…

H.H. Holmes didn’t just own a hotel where he spied on, captured, and murdered women, but he modified it from the ground up to be a giant trap. Many of the rooms were sealed with hidden entrances and had no windows to the outside. There are also a number of hallways that like a labyrinth were constructed specifically to end in a flat wall with no exit but back.

It even featured a wooden disposal chute and a kiln large enough to fit a person in the basement. Within the “special” rooms the Murder Castle had a room soundproofed from the outside and fitted with exposed gas lines that were used to asphyxiate his victims when he was finished with them.

Holmes was by trade a pharmacist, but garnered the title of doctor amongst his gangster clientèle who he would provide both medical treatment and illegal prescriptions to. In 1885 he bought his first pharmacy at the corner of E. Wallace and W. 63rd Street in the Englewood neighbourhood of Chicago.

This allowed H.H. Holmes the freedom to distribute to his gangster clientèle unhindered, but also proved to be a wise investment in legal terms as the 1893 World’s Fair would soon commence not more than a few blocks from his business.

With his new found income Holmes went about purchasing the connected properties throughout the block until he owned the entire section, then came the renovations and construction of his murder castle, which he named the World’s Fair Hotel. It was completed in time for the World’s Fair, and with a mass influx of travellers and tourists to the neighbourhood the killings began.

What’s more disturbing was Holmes’ recruitment of others into his killings. During the period of renovations, H.H. Holmes met Benjamin Pitezel, a carpenter with a criminal past and some very bad habits.

As with most serial killers Holmes was described as charismatic and overly intelligent, so it’s no surprise that Pitezel came to idolize the monster in Holmes. Years later at Holmes’ trial Pitezel would be labelled as his “tool”, his task was to mark and seduce single females at the World’s Fair and return them to the hotel for Holmes’ pleasure.

Meanwhile Holmes had his own large scale scheme at the Murder Castle itself secretly torturing and murdering female staff which H.H. Holmes was very fond of. This created an exceptionally high turn-over rate in employment, and new female employees were required as terms of their employment to take out life insurance policies for which Holmes would pay the premiums but was also the beneficiary resulting in a large payout each time Holmes tortured and killed.

But that’s not the only manner in which he managed to profit from his guilty pleasures. During his years at medical school he had made a number of acquaintances, some of which were not entirely ethical. Once Holmes had finished with his torture and killing bodies were dumped down the wooden disposal chute to the basement where they would be meticulously dissected, their organs and bones were harvested for resale as medical cadavers.

Following the World’s Fair the Chicago economy was in a general slump and H.H. Holmes creditors were closing in. Fortunately for Holmes’ he had inherited a large property in Fort Worth Texas from two sisters, railroad heiresses to one he had promised marriage but both he killed.

As it would turn out Fort Worth at the time was not nearly the metropolis that Chicago was and the law enforcement of the region did not take kindly to women vanishing, being tortured, raped, murdered, and dissected – so Holmes moved on.

The next few years were spent with only the occasional kill, but with numerous swindles and scams. Pitezel was still in tow, but he had also met a new associate: Marion Hedgepeth aka the Handsome Bandit, the Debonair Bandit, the Derby Kid and the Montana Bandit.

Hedgepeth was the classic Wild West outlaw and train robber and the two concocted numerous schemes at money making. These events attracted the attention of the infamous Pinkertons, a private security guard and detective agency with a disproportionate amount of power in late 19th century America.

HH Holmes – The Discovery of a Monster

Meanwhile back in Chicago, the sole custodian left as caretaker of the Murder Castle, was growing suspicious of some of the less routine aspects of his employment. He reported to the authorities that H.H.

Holmes had strictly forbidden him from ever entering the upper floors despite that a rotting odour was beginning to seep out into the rest of the building. With Holmes’ name atop the Pinkerton suspect list the authorities were quick to investigate. You can imagine what they found: rooms built like prisons, torture devices, and blood stained walls in one out of every two rooms, then somebody opened the door to the basement.

Twenty seven bodies were found so completely skinned and dissected that the officials had a tremendous effort even counting them as twenty seven bodies. Based on the evidence within the Murder Castle and the sheer number of missing person reports from the neighborhood, the authorities determined that a minimum of two hundred people had been tortured and killed within the walls of the castle.

Surprisingly Holmes’ arrest was not for the hundreds of women (and even the occasional child), but for the killing of Benjamin Pitezel. In the course of the trial the full account of the Murder Castle was prosecuted and Holmes was hanged at Moyamensing Prison, now the Philadelphia County Prison.

Following Holmes’ death things get even stranger. A biographer, Jeff Mudgett, submitted handwriting samples from H.H. Holmes resulting in a 97.95% handwriting analysis match with the infamous letters written by Jack the Ripper.

In 1914, the Chicago Tribune reported that “the mysteries of Holmes’ Castle” would remain unexplained, and in fact they have. So much of Holmes’ time and murders is hidden in the fog of missing tourists from far away countries and the ashes within his kiln.

We know only a fraction of where and what he did following his leave from Chicago, but with only the information we do have, H.H. Holmes was a one of a kind, terrifying, and fascinating monster.