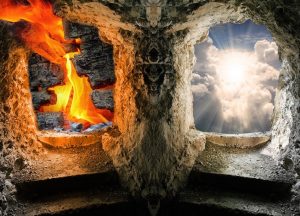 There are many different opinions on heaven and hell, depending on religion and personal beliefs. Some people strongly believe that there is both heaven and hell and some do not.

There are also people who have specific reincarnation beliefs. Overall; everyone questions; what happens after death.

In most all religions, there is a place called heaven. This existence is believed to be a permanent universe which individuals transition to after death. Spiritual advisers refer to this place as a peaceful existence where there is no pain or suffering, just happiness.

According to an ABC News report, close to nine out of ten people throughout the United States believe in heaven. However, some people have a different opinion as to the answer of the following question; what is heaven like? Every culture and religion has raised questions about afterlife.

Christians and Jews have expressed their beliefs about heaven and they basically believe that afterlife mankind is transformed into spiritual beings known as angels.

However, the exact believes somewhat vary and they have often changed with each generation. Many believe that angles are simply messengers of God sent to look after those on earth.

For those who don’t believe in heaven or who are somewhat skeptical of its existence often base their theories on scientific beliefs. For many skeptics, it would take 100% proof of heaven’s existence to make them believe in afterlife. While Christians simply stress that faith is all that is needed.

The beliefs about hell are somewhat scary or even terrifying. Many religious people strongly believe in both heaven and hell. To those who believe in hell, it is a place of pure punishment afterlife.

For those who have not been forgiven for their sins, it is believed that God may choose to send them to hell. Many believe those who go to hell will endure eternal suffering.

Near Death Experience Stories – Real Stories of Life After Death

One factor that gives people hope and faith is hearing real stories of life after death. There are many people who have reported near death experience stories, explaining a bright light or tunnel to heaven, being what they had believed was a transition to heaven.

There is one particular story that truly gives people the chills, reported by M.D. Janis Amatuzio working in an emergency room in 1994. According to an article on New Connexion, told by a Dr. Janis Amatuzio, there is definitely life after death.

A young 26-year-old man was found dead in his vehicle. The vehicle was turned over in a frozen creek bed, where he had ran off the side of the road. It was reported that the man had severe head injuries, but no internal damage to his organs.

The family chose to donate the organs, so it was the doctor’s job to make sure the deceased man met the criteria for donation. As the doctor was walking down the hall after finishing all the necessary paperwork, she met with the hospital chaplain, who asked to talk to her about the fatality.

As the doctor began to assure the chaplain that the organs were “okayed” for being donated, he let her know that this wasn’t what needed to be discussed.

The chaplain then proceeded to explain how the 26-year-old man was found. He explained that the police had reported that the wife made a phone call that early morning, explaining that she was lying in bed and saw her husband standing over her explaining that his vehicle was in a ditch and that it couldn’t be seen from the road.

The husband apologized to his wife, saying his goodbyes. It was reported that his body was found 20 minutes after the woman made her police report.

Heaven and Hell – What Happens After Death?

There are so many people who question life after death. There are also many different beliefs on heaven and hell or what really happens after death.

However, the real stories of life after death have given people much hope and faith, knowing there is an existence of afterlife.