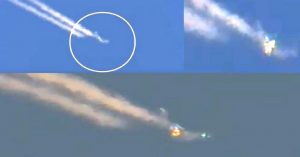 This video was made by an American Linda Miller. In mid-July of this year, a woman went outside to film the setting sun.

At some point, she turned the camera in the other direction and captured a plane flying across the sky, but upon closer examination of the video received, it turned out that the aircraft (or something else) was not very similar to the plane.

“2nd object spotted last evening. I’ve been up all night editing. The colors are the real thing, just adjusted exposure. It is really pretty and weird all at the same time. I have no freakin’ idea.”