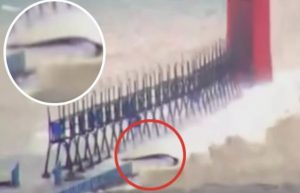 Freshwater Lake Michigan is the largest lake in the USA and belongs to the Great Lakes group. Its depth is up to 281 m, length is 500 km.

Unusual creatures were observed in many large lakes of the world, but to Michigan, surprisingly, there are no such legends about the “water dinosaurs”. And nevertheless, it seems that something very long and black lives in Lake Michigan.

This video (see below) immediately caused much controversy. Because on unclear frames it is difficult to distinguish what it is – a huge snake, an eel or a clump of algae.

The camera was installed with a view of the southern pier of the lake and on June 13, 2019, when this recording was made, a real hurricane was raging in the vicinity.

On the video you can almost immediately notice a long black body in the waves. At some point, even the creature tail is visible. This creature is trying to cope with the waves that inevitably carry it on the supports of the pier. However, he could not get out of there and the waves dragged him through the supports.

After a few seconds, this creature emerges at a quiet pace from the left side from under the pier and hides behind the scenes.

Much indicates that this is not just algae. The creature moves as if alive, deftly twisting its tail, and on its body at the end you can see crests, like a crocodile. But this is certainly not a crocodile, but something much longer and it seems without paws (and crocodiles are not found here).

The mystery of what exactly got on the camera at the pier, still remains one of the most discussed local topics and remains unanswered.

US authorities received 510 UFO reports in 2022