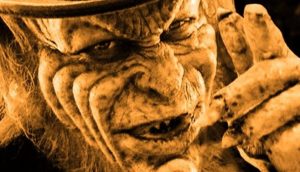 Tata Duende was used to scare kids into behaving, which may be one reason why some doubt he exists. Believers had encounters with the Duende or knew people who did.

Zoologist and author Alan Rabinowitz, while studying jaguars in Belize’s Cockscomb Basin, wrote about the natives’ prevalent belief in the Duende’s existence and his experience with sighting a strange little man, about three feet tall, standing at the edge of the forest at night.

The creature is featured on a Belizean postage stamp as part of a folklore series. Tata is a Mayan word for “old man” or “grandfather;” Duende, Spanish for “dwarf” or “goblin.”

Duende is usually portrayed as a shriveled, hairy man with pointy heels who stands about four feet tall. Sometimes he holds a machete, guitar or stick. He’s often clothed in hides or rags and always wears a large hat.

The Duende is trickster and scalawag, not malevolent. He has a flair for language, music and/or hypnotic powers.

The Duende seems to possess too many classic fairy tale traits. If it’s a mythical being, its origins are unclear. It might represent a blend of the Spanish Duende, a troublesome household spirit, with AmerIndian trickster and forest guardian beliefs.

In Belize, formerly British Honduras, the legends may have become mixed with the lore of the British Isles and African slaves.

Parents would scare children with tales of El Duende del Monte to make them behave, as people in the UK and America did about the boogie man and goblins. El Duende protected forest animals and would punish those who hurt them.

There are a wide array of reported Tata Duende sightings on record.

Spanish/AmerIndian woman said the Duende was a type of entity in the form of a small, non-hairy man or a boy with a hat. Her brother claimed to have seen one when he was a child.

Park ranger encountered the creature when he was a boy. A small thumb-less man called to him. The sound put the child into a trance, so he followed it. The “spell” was broken when his mother summoned him home.

Native said his uncle, while hunting, had been abducted and put into a trance by a Duende.

Kekchi Shaman said it was a shapeshifting supernatural being, a spirit of the dark representing the power of the land, that could be summoned by a Mayan Shaman with prayers and incense.

Mayan, an expert in local natural history, saw one that was a hairy animal, not a spirit. It was wearing big black and golden Mexican mariachi hat.

There is argument for both sides. The creature’s alleged characteristics appear to be a blend of European, AmerIndian and African lore, but there have been sightings of the Duende by credible witnesses. Hairy bipeds have been sighted on continents except for Antarctica. Almas, also small ones, have been seen in Eurasia.

The onza is a mysterious Mexican big cat whose existence is still a matter of controversy: Is it a subspecies of a puma or an animal with its own classification?

People once laughed at the thought of winged cats, but they have been documented by scientists studying live ones and the bodies of those who have died.

Could it be the Duende is a cryptid whose traits have been exaggerated by legends and fear?