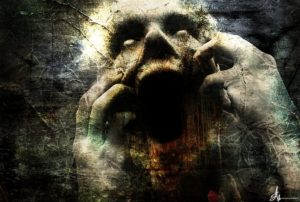 My name is Randy. My story takes place in a small town in Missouri. Flint Hill can hardly be called a town since there is only a grocery store, bar and a few houses. I had moved there from Wentzville, which was only about five miles away, when the owner of the house I moved to started dating my mother.

The owner of the house had a son named Johnny. Johnny was 19, and he stayed there with me. He was also to share in the fright that still haunts me to this day.

It was a mild April night, and for two teenage boys living alone, it was the beginning of what was supposed to be a party. Early in the evening we were shooting beer cans off the fence with a shotgun that belonged to Johnny’s father.

Did I forget to mention that we were emptying them ourselves?

After a while my girlfriend showed up and was wanting a little time with me alone. Johnny, catching the hint, headed out to the next town to meet up with some friends having a party.

A few hours later Johnny came bursting through the door.

He loaded the shotgun and threw me the pistol instructing me to keep my girlfriend away from the windows. At first I had thought he had gotten into some trouble and people were on the way to do us harm. After standing guard for an hour I finally asked what had happened.

While driving down the road, Johnny’s car had died for no reason. (An occurrence we had all gotten used to) Not wanting to bother us, he decided to walk the rest of the way to the party. As he was walking down the road he started hearing a strange sound. It was far off, and since he couldn’t quite make it out, he dismissed it as a cow.

But as he walked the sound kept moving around and getting closer. At first it was far off in front of him. Then it was behind him. Then on one side, then the other. Each time getting closer and closer.

The closer the sound got, the less it sounded like a cow, and more like a man screaming in pain. Johnny said that he didn’t get scared until it sounded like the scream came from directly behind him and when he turned to see it, there was nothing there. That’s when he ran back to the house.

I immediately dismissed his story as a prank. Even though Johnny, white as a ghost, insisted that it was true, I refused to believe him. Until the next night.

The following night Johnny’s father showed up saying that my mother wanted to talk to me. There was something about the way he said I was not in trouble that gave me chills. Upon reaching my mother’s house, I was informed that my brother had died in a motorcycle accident the night before.

My brother and a friend had lost control of the bike and slid into the back of a tractor trailor. The friend had died instantly, but my brother had dragged about fifty feet and was still screaming when the paramedics arrived.