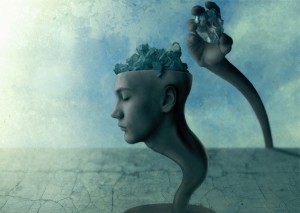 Déjà vu a feeling that one has seen or heard something before or “already seen”. Is the experience of feeling sure that one has witnessed or experienced a new situation previously (an individual feels as though an event has already happened or has happened in the near past).

The term was coined by a French psychic researcher, Émile Boirac (1851–1917) in his book “L’Avenir des sciences psychiques” (“The Future of Psychic Sciences”), which expanded upon an essay he wrote while an undergraduate.

The experience of déjà vu is typically accompanied by a compelling sense of familiarity, and also a sense of “eeriness,” “strangeness,” or “weirdness,” The “previous” experience is most frequently attributed to real life, although in some cases there is a firm sense that the experience “genuinely happened” in the past.

Charles Dickens explains déjà vu in his own words stating, “We have all some experience of a feeling, that comes over us occasionally, of what we are saying and doing having been before, in a remote time -of our having been surrounded, dim ages ago, by the same faces, objects and circumstances- of our knowing perfectly what will be said next, as if we suddenly remember it.”

Some speculate that the phenomenon of past lives can answer troubling questions in the present and explain déjà vu. A woman might walk into a building, for example, in a foreign country she’d never visited, and sense that the setting is eerily and intimately familiar.

Many people report that they have walked down a street in a strange city and been overwhelmed with the unexpected familiarity of its shop windows, sidewalks, and store fronts.

Early researchers tried to establish a link between déjà vu and serious psychopathology such as schizophrenia, anxiety, and dissociative identity disorder, with hopes of finding the experience of some diagnostic value.

There are different explanations for the origin of Déjà Vu Phenomenon.

Déjà vu is associated with precognition, clairvoyance or extra-sensory perceptions, and it is frequently cited as evidence for “psychic” abilities in the general population.

Non-scientific explanations attribute the experience to prophecy, visions (such as received in dreams) or past-life memories.

Some believe déjà vu is the memory of dreams. Though the majority of dreams are never remembered, a dreaming person can display activity in the areas of the brain that process long-term memory. It has been speculated that dreams read directly into long-term memory, bypassing short-term memory entirely.

In this case, déjà vu might be a memory of a forgotten dream with elements in common with the current waking experience. This may be similar to another phenomenon known as déjà rêvé, or “already dreamed.”

However, later studies on mice indicate that long-term memories must be first established as short-term memories. Kevin Heady suggested that a feeling of remembering occurs in a sense that he might realize that what he had dreamed is now a relevant present action that is taking place right here right now.

“I was once sitting down in the kitchen noticing that my plate seemed well too familiar, it seemed as if my head motions were foreseen, and that every move would trigger a continuation to happen or so, I had many déjà vus as a child but this was extraordinary, I knew from the bottom of my heart that I had dreamed this situation years ago, as a little boy, that amazingly an entire piece of memory was regained and I finally understood when and where I was dreaming and how long this dream was, and most importantly how many years ago did I dream.”

Those believing in reincarnation theorize that déjà vu is caused by fragments of past-life memories being jarred to the surface of the mind by familiar surroundings or people. Others theorize that the phenomenon is caused by astral projection, or out-of-body experiences (OBEs), where it is possible that individuals have visited places while in their astral bodies during sleep.

The sensation may also be interpreted as connected to the fulfillment of a condition as seen or felt in a premonition. For further cases of remembering information from past lives.

However, there does not seem to be any special association between déjà vu and schizophrenia or other psychiatric conditions. The strongest pathological association of déjà vu is with temporal lobe epilepsy.

This correlation has led some researchers to speculate that the experience of déjà vu is possibly a neurological anomaly related to improper electrical discharge in the brain.

As most people suffer a mild (i.e. non-pathological) epileptic episode regularly (e.g. the sudden “jolt,” a hypnagogic jerk, that frequently occurs just prior to falling asleep), it is conjectured that a similar (mild) neurological aberration occurs in the experience of déjà vu, resulting in an erroneous sensation of memory.

There are several other theories that try to explain this phenomena, but none can be one hundred percent proven and with déjà vu arises way too many unanswered questions that the human mind can measure. As with intuition, research into, human psychology can offer more naturalistic explanations, but ultimately the cause and nature of the phenomenon itself remains a mystery.