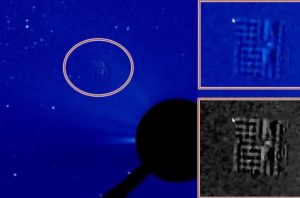 The SOHO probe, on which special equipment is installed, including cameras that allow us to monitor and study our Sun, has sent new images, one of which again revealed something strange.

This is repeated periodically and is already beginning to worry not only ufologists and conspiracy theorists, but also scientists.

The picture, published on the official website of NASA, clearly shows a strange gigantic size cubic structure. Independent researchers even noticed some inscriptions on this cubic anomaly, not to mention the fact that nature does not create strict geometric shapes, all the more strange it is to see them near the Sun.

While ufologists are trying to decipher the mysterious inscriptions (if this is not just a pareidolia) on the “solar cube”, official science has not yet made any conclusions: scientists seem to be confused.

Lack of knowledge, as it has long been known, sometimes generates the most absurd ideas and fears.