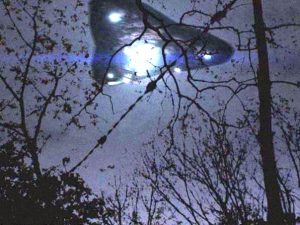 Many areas on the east coast of Britain contain top-secret military installations.

One island called Orford Ness, just off the coast of Suffolk, was the site of many still unrevealed chemical, biological, nuclear and radiological weapons experiments during the 1940s, 50s and 60s – and as a matter of interest has an imposing lighthouse.

Some of the other bases near the coast have been leased to the US Air Force; the twin installations at RAF Bentwaters and RAF Woodbridge were two oval complexes and formed a vital part of NATO’s defence against Communist threats.

It was reported that at the height of the Cold War these cojoined airbases housed the most nuclear weapons outside the Soviet Union. This important and serious tactical presence meant the bases were fiercely guarded and were hidden in a thick ring of woodland known as Rendlesham Forest.

In December 1980, two strange events, which were witnessed by some of the forces stationed at the bases, occurred in this Rendlesham forest and would go down in history as one of the most fascinating UFO cases ever recorded.

The unique aspect about the Rendlesham forest incident is that within three years of it happening, the public had proof of official, military documents detailing the events that were witnessed. The witnesses were not simple country folk, lunatics or publicityseekers, they were trained, professional US Air Force personnel.

Indeed, the most famous name connected with the incident, Lieutenant Colonel Charles Halt, was the Deputy Base Commander in charge of Bentwaters and Woodbridge’s security. Not only did Halt write and submit the official report, he was also a first-hand witness at the second of the two strange happenings.

His memo, sent to the British Ministry of Defence, was released by the US authorities under the American Freedom of Information Act in 1983, after rumours about a period of bizarre incidents at the site begun to circulate among UFO enthusiasts.

The subsequent publication of sensational stories about Rendlesham appeared in tabloid newspapers, and the continued silence by British authorities meant many believed something odd did occur. So what did happen around the Rendlesham Forest in December 1980?

Halt’s memo recorded that the first incident happened in the early hours of 27th December 1980. He wrote that two perimeter security patrolmen saw a strange light outside the back gate of RAF Woodbridge, which they thought may have been a crashed aircraft. They called their commanders for permission to investigate, and three patrolmen went to search the nearby land on foot.

These three military guards reported viewing a bizarre glowing subject in the forest which appeared to be made of a metallic substance. It was triangular in shape, two to three metres wide and about two metres high. It was said to light the whole forest with a bright white beam. It had a red light as its peak, blue lights along its base, and seemed to hover or stand on legs.

As the Air Force personnel approached it, the object weaved through the trees and disappeared, causing the nearby farm animals to go into a frenzy An hour later, the strange object was briefly seen again.

The next day, Halt wrote that more servicemen from the base ventured into the forest to see if they could see any markings or tracks. They found three, 1-inch-deep and 7-inch-wide depressions in the area where the object was seen. On 29th December, base personnel tested for radiation levels and found higher-than-normal readings in the centre of the formation of depressions, and on a nearby tree.

During the night of the 29th, and the morning of the 30th, another ‘red sun-like’ light was viewed moving and pulsing in the forest. Halt personally saw the oddities and his memo reported that it ‘appeared to throw off glowing particles and then broke into five separate white objects and then disappeared.’ Three strange star-like objects were seen darting rapidly about the night sky exuding red, green and blue light.

They remained visible for two to three hours, and ‘beamed down a stream of light from time to time’. Over time, many of the Air Force witnesses have come forward and offered their own accounts of what happened those nights.

Halt himself took an audio, micro-cassette recording of his commentary as events happened on the second occasion. However, his official report was not written until 13th January 1981 and there now seems to be confusion with dates. Local police records show that they were called by the US Air Force about the first incident on the morning of 26th December 1980.

On the other hand, some reports state that a nearby radar station at RAF Watton recorded an unusual ‘uncorrelated target’ that disappeared near Rendlesham Forest at around 2am on 27th December.

Other researchers have revealed that Halt actually called RAF Watton in relation to the second sighting at 3:25am on 28th December. Seemingly, there is a fundamental disagreement between Halt’s dates of occurrences during the mornings of the 27th and 29th, and other agencies involved which state they happened early on the 26th and 28th.

Many investigators believe the events themselves were nothing more than the result of misunderstandings and visual illusions. The initial cause of the supposed UFO sighting may have been an exceptionally bright meteor that appeared over southern England just before 3am on 26th December. It has been suggested that the subsequent triangular, metallic object was in fact a tractor, seen from a distance with its night lights switched on.

Many investigators believe the bizarre beam of white light see illuminating the forest was actually caused by the Orford Ness lighthouse. Similarly, there are benign explanations for the resulting depressions – they may have been indentation caused by old rabbit burrows.

The radiation levels recorded, although higher than naturally expected, are said by some experts to be negligible. It is undoubted that many of the US servicemen viewing these bizarre occurrences must have been extremely excited, and may have become confused and irrational.

Certainly the police who visited the scene recorded no sighting of UFOs. However, the personnel were also trained airmen, and the bases at Bentwaters and Woodbridge had been occupied by US forces for many years, so they had grown accustomed to the area.

The fact that these installations were the base for seriously powerful weapons meant that the staff there could not be prone to flights of fancy. Similarly, Woodbridge was the home of 67th Aeroplane Rescue and Recovery Squadron – a unit specialising in the retrieval of returning satellites and spacecraft.

This highly advanced and technological group answers directly to the Pentagon in Washington, and one would hope they would have been able to identify the differences between any known aerial or space vehicle, and a tractor.

In recent years, the British Government silence – which led many to believe in a UFO cover-up at Rendlesham – has receded. In fact, the complete file of documents relating to the incidents has been released.

The official explanation that the Ministry of Defence had nothing to say on the matter because there ‘was no reason to consider that the alleged sightings had any defence significance’, has been proven honest.

The newly publicised documents show the MOD did investigate the sightings but could find little cause for concern. Their analysis does not entirely coincide with the views of Georgina Bruni who wrote the seminal book on the Rendlesham UFO mystery, You Can’t Tell the People.

Bruni interviewed all available witnesses and was even given a personal tour around the US installations. She also managed to catch a quick unexpected word with the ultimate Chief of British forces at the time, the Prime Minister Margaret Thatcher. Her words to Bruni were both interesting and mysterious: ‘You must have the facts, and you can’t tell the people.’