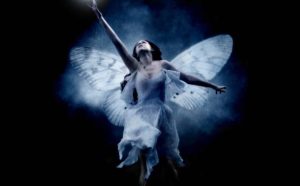 Many mysteries surround the subject and many of these tales carry dire warnings of secrecy. Even today in certain parts of the world, some people still consider it unlucky to talk about ‘the little folk’.

One theory put forward in the 1940s as to their origins, was that fairy legends (often connected with sites known for burial) originated from a cult of the dead.

Fairies, according to this theory, are nothing more than another form of ghost. Since fairy sightings were often linked to ruined houses, some saw fairyland as a sort of Hades where the dead dwelt until the end of time.

To support this somewhat unromantic notion, there are numerous stories linking them to death. In fact, most of the older tales draw little distinction between ghosts, brownies and goblins. Some even believed that fairies are ghosts of long dead druids, replenishing their numbers from time to time by stealing mortals.

There are stories of people disappearing mysteriously since time began and explanations have changed according to the era. At one time it was believed that anyone who slept under a rowan, hawthorn, holly or elder bush, was in danger of being soothed away into the Other World or even, the Fairy Realm.

For this reason, none of these trees were brought indoors when in bloom. Gods, demons, fairies and even UFOs have been blamed for the inexplicable cases of vanishing people!

A prominent belief in the Middle Ages was that fairies were fallen angels. Not quite as bad as the Devil and his followers but sinful enough to be barred from heaven and confined to the earth. Many clergymen denounced this view, declaring them as nothing more than demons and imps from Hell.

The Faerie in Medieval Times

Magicians and witches of medieval times regarded the fairy folk not as creatures, but as elemental spiritual forces to be controlled. All it took was some complex rituals to conjure them up!

Fairy legends are spread far and wide, almost every country having legends of a hidden race living outside the bounds of man. Many Indian tales of little folk compare strangely to European ones.

They tell of a mischievous small race that could be good or evil depending upon their whim. Further north, the Eskimos have legends of dwarfs working and living in caves remarkably similar to the Norse.

From these myths, it can be assumed that: Once upon a time, a world-wide race of people who were small in stature may have existed. They were eventually displaced by the ancestors of modern man.

To substantiate this theory, in the archaeological field, some studies do tend to support the pygmy belief and this lends an air of tenuous respectability to these tales. Were they perhaps based on solid foundation?

It is believed that the first inhabitants of Western Europe were a small, dark people who lived in the forests. An example of this race can be found in the pre-history of the Scandinavian peninsula.

Prior to the invasion by the larger Gothic races, this was home to a group of people skilled in the art of mining and refining metals. Invaders came from the east and the ‘little people’ had no choice but to retreat and survive or fight and die. No doubt there was some intermingling of races – the mass of tales concerning fairy wives seem to confirm this.

Later invasions would see more blending of races, suggesting that certain practices and beliefs from one, merged into the other.

And the fairy myth still exists. The stories and tales around the little folk being adapted to suit the situations believers find themselves in. Without doubt, wherever man goes, so too will the legends of his past.

The Mysterious Beginnings of Scientology