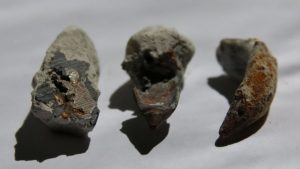 In Sevastopol, incomprehensible inclusions were discovered in rock, which is more than 70 million years old.

The head of the enterprise, whose employees discovered the find, Sergei Chumak, said that the stone was mined at a depth of about 100 meters. This breed belongs to very old layers.

A block of limestone began to be cut into pieces and strange objects were discovered in its bowels. “Rossiyskaya Gazeta” reports that they are definitely of artificial origin.

Experts concluded that these “artifacts” very much resemble arrowheads or bullets. Two of them are crescent-shaped and slightly flattened. The metal resembles copper, but for now it is impossible to say for sure without a special chemical analysis.

Other fragments were also found nearby, which in appearance resemble wooden fragments. They have grown quite a long time into stone and oxidized.

Workers of the enterprise noted that this is the first time that entire products have been discovered.

The age of the rocks is approximately 70 million years. Back then, dinosaurs still roamed the earth. The first person who could do something with his own hands appeared only about 3 million years ago. People began to process metal even later.